By Pivní Filosof March 18, 2010
A couple of days before last Christmas I got in mailbox an announcement telling me I had a parcel from Norway waiting for me at the local post office (which is in the next village).

"Hmmm!" I say opening my eyes wide and twisting my mouth appropriately to express my intrigue. I wasn't expecting anything from the long country of the North. After seeing the parcel's weight written on the slip I reckoned, and hoped, they were beers. And so it was. Jens from Haandbryggeriet had sent me a few samples of his beers: Aqua Vita Porter, Haandbakk, Norse Porter, Dark Force, Gravøl (that will have a separate review) and one of my last year's favourites, Norwegian Wood, plus one more bottle that didn't survive the trip.

I must say that, after having tasted several of their beers, Haandbryggeriet has become one of my favourite breweries. Their product line is very interesting and varied, many of the beers are fermented using their own strain of "wild yeast" and recreate ancient Norwegian recipes. It might turn out that some of the results are not to everyone's taste, but their concept and execution still deserve praise.

The one I was most curious about from the batch was Aquavita Porter. This "fad" of aging or maturing beers in oak barrels, specially if they were used for other drinks, is really interesting, even if some of the products don't turn out that good. This one in particular is a Norwegian Porter with 10%ABV that was matured in old Aquavit barrels. Since I had never drunk that traditional Scandinavian spirit, I had no idea about what to expect from this beer. 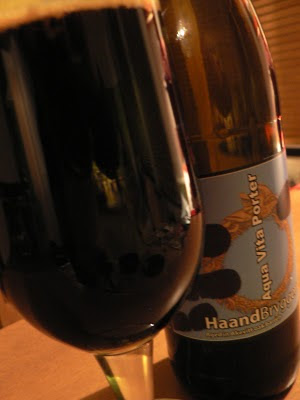 Aquavita Porter is fantastic! Boozy nose that reminds a bit of Cognac, with notes of burnt wood and some dried fruits. It's incredibly complex, bitter chocolate, pepper, burnt sugar, mild vanilla. Each of them taking their turn without stepping on the other one's toes. All ends in a dry and slightly spicy finish. Despite all this and its rather high ABV the beer goes down really smooth. Great to sit by the fireplace reading a good book. Spectacular! 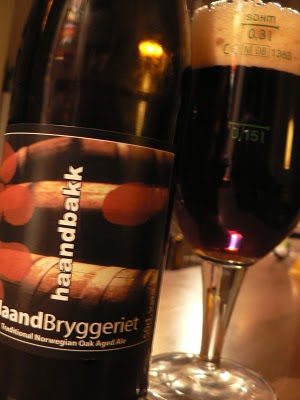 The other Barrel Aged sample of the bunch was Haandbakk, a Sour Ale with 7.5%ABV that was matured in old French wine casks. Definitely not recommended for beginners. Those of you who have never tried a sour beer, or those who don't like them, better stay away from this one. Now, for those of you who do enjoy some sourness in your lives, this is something you should have a go at. Pours a pretty fizzy ocher. The nose is a mix of Extra Brut Champagne with mild caramel. My taste for sour beers is not all that well developed yet, at the beginning I found Haandback to be very pleasant, the sour notes were well balanced by sweet fruit. However, as I emptied that half litre measure and the beer warmed up, the sourness built up and I didn't find it so easy to drink anymore, but that's something that's happened to me with, for example, Cantillon Geueze. Perhaps I could enjoy it a lot more in smaller measures or paired with some really aromatic cheese. 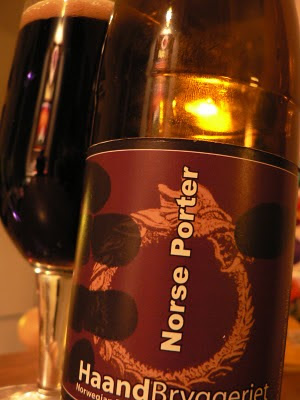 Leaving the realm of the exotic for a bit I chose Norse Porter and its more moderated 6.5%ABV. It pours as expected and already here you can see its excessive carbonation, which by the way, is a problem I've seen in several beers from HaandBryggeriet. So many bubbles do away with much of the body, that aside, Norse Porter is a fine beer, with aromas that remind of chocolate with a smoked note or two. The chocolate, now more intense, comes back in the taste, now joined by caramel. The finish is long and has some pleasant sourness added to it. Nothing out of the ordinary, nothing out of place, either.

It took me several days, if not weeks, to finally open Wild Thing. I thought it would be something on the lines of Haandbakk and I really have to be in a special state of mind to tackle a sour beer. When the day arrived I was met by a very pleasant surprise. 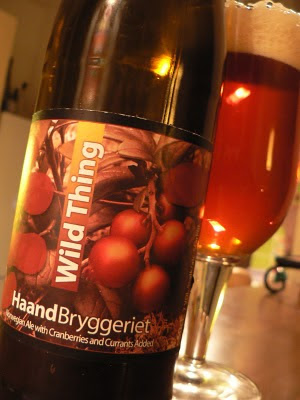 Wild Thing is one of those "historical beers" of HaandBryggeriet. Its label says that is brewed with three grains, flavoured with cranberries and currant and fermented using the house's wild yeast. It pours and intense reddish amber, topped by a compact head that his a mild pink hue. The best way to describe its aroma and flavour is a "blend between dunklesweizen and fruit lambic". That might not sound very appealing to some of you, but believe me, it is a delicious beer. Perfectly balanced, each of its elements know the role they have to play and don't do anything they shouldn't. Even my wife, who doesn't even want to hear about sour beers, loved it. Even with a rather respectable 7%, Wild Thing goes down almost like session beer. I see it ideal to drink in a cool summer evening while the sun goes down. 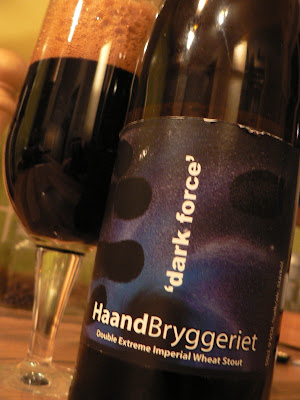 To close the session I was left with Dark Force, which calls itself an Imperial Double Wheat Stout or whatever. To the eye looks just like any other Imperial Stout. There was too much alcohol on the nose backed only by some dry wood. Perhaps I was expecting something more complex or exotic, but the truth is that it didn't quite make it for me. It's halfway between the Impy and a Weizenbock or something similar, but without the most interesting bits of either of them. It could be a good alternative for someone who's never had a dark beer of such intense character, but I expected more.

As whole, these bunch serve to reinforce my sympathies for HaandBryggeriet. I really like their philosophy of digging out some recipes from the past using them to, paradoxically, offer something new and out of the ordinary; at the same time breaking a bit the mold that good beer can only be made with a limited set of ingredients and that they should fit into a specific style. Yeah, there are a few breweries around the world that do something similar, but that doesn't take away merit from this Norwegian brewers.