By Pivní Filosof November 12, 2009
Just like last year, and the year before, the good people of Sdružení Přátel Piva were kind enough to invite me to their annual award ceremony, which, to a certain extent, is actually an excuse to get together for a few beers with friends, colleagues, etc.

This year's edition took place at Pivovar Strahov. It seems thasince there was no need to travel anywhere, more people that usual attended. I arrived at 11 and the downstairs room was already packed. 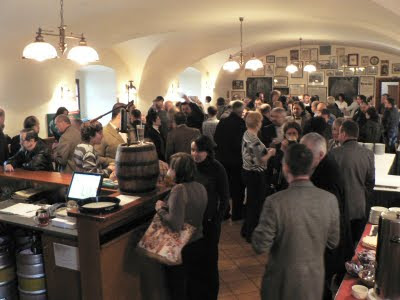 It wasn't long before a glass of beer almost magically materialised in my hand (Budvar Dark, fine, but way too cold for my taste). It was a rather chilly day, but I was thirsty after the walk from Dejvická. I found Evan Rail and while we exchanged stories about our family lives and greeted a few known faces, the beginning of the award ceremony proper was announced. With a new beer in hand (Chotěboř světlý ležák, really good) I followed the crowd to the room upstairs, which was also wall-to-wall full. 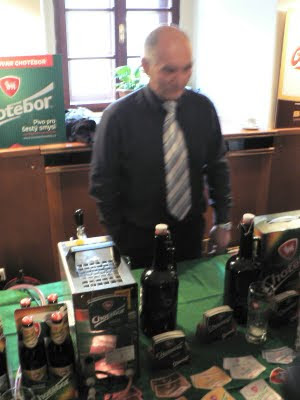 The ceremony was fun and didn't feel too long, partly thanks to the reigning good mood. I'll analyse the awards tomorrow, if I get the list, because I didn't bother to take notes. 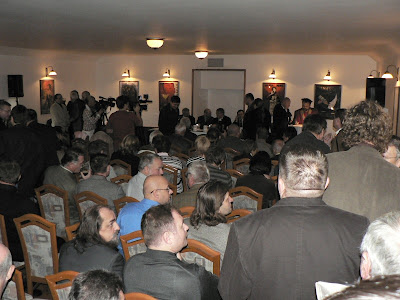 Once the formal affair was over, food was served. The line at the buffet table was pretty long, but moved quickly. The food that I had (onion soup, bramboračky, pork ribs, chicken wings and some smoked stuff) was finger licking good (and fingers had to actually be licked since it was easier to eat most of it with the hands).

With a full plate in one hand and a beer in the other we went back upstairs to eat more comfortably. With Evan and his friend Chris (an American brewer living in CZ) we chatted about many topics, mostly beer, though. Later we were joined by Aleš Dočkal and so the beers went by (or the hours, whatever).

Even though there was plenty to choose from, it was very difficult to resist the magnetic attraction of the host beers from Strahov, both great, specially the dark one, and the ones from U Medvídku, in fantastic shape, both. Before leaving, when almost everyone had packed and gone away, I had a glass of Herold Weizen, which I noticed tastier and with more spice than in previous occasions, something that made me really glad.

I had a fantastic time, not only thanks to the very good beer and food, but also because of the people. It was really nice to have a chat, even a short one, with people I hadn't seen for some time, or with new people. It also made me pretty happy to be recognised, and not as the crazy Argentine that comes to drink for free, but as "Pivní Filosof". Several were those who asked me about my daughter, my home-brewing adventures or complimented my blog. One of them, the owner of První Pivní Tramvaj, even asked me for a Czech version of this blog. It would be nice.

Good food, great beers and even better company, can a day get any better?