By Pivní Filosof November 05, 2009
Do you remember that I told you I was going to let MB Porter årgång 2008 age a bit? Of course you don't! Well, I did say it, you can read it here, at the bottom of the page. Doesn't matter, I changed my mind, anyway.

As I've already mentioned, I really fancy dark beers this season. The other day in the afternoon I went to the cellar to pick something dark to drink and there she was, MB Porter, calling me, tempting me. I couldn't resist. I'm not the patient kind of guy, I don't think I'll ever be able to let a bottle gather dust in my cellar for a year or so. 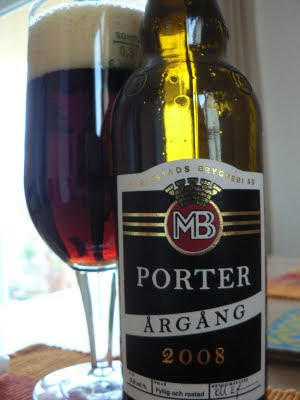 MB Porter årgång 2008 pours very dark amber, clear against the light, topped by a spongy beige head. The bouquet has prunes, molasses, chocolate and a little bit of tobacco. The palate is treated with notes of chocolate, roast, some licorice, everything wrapped in an unctuous mouthfeel that is really nice to roll around your mouth for a bit. The finish is dry with a background of dry fruit, long and very tasty. A hint of smokiness lingering throughout the sip makes this beer even more pleasant to drink in a cold autumn afternoon.

I don't have experience with aging beers and, save for this one occasion, I haven't had the chance to compare the same beer with and without aging. However, something tells me that I did well in opening this beer now, a bit more than a year and a half after it was bottled. I can't really tell why, but I feel that it would not have improved with further aging. I guess I'll never know.

Another thing I noticed. When Gnoff gave me the bottle (thanks mate!), I asked him if this was a "Baltic Porter" or just a Porter. He told me it was the latter. I don't know how "true to style" MB Porter is (and frankly, I don't give a toss), but I couldn't help but notice a strong family resemblance with several Baltic Porters I know. Interesting.