It's been already more than two and a half years that this blog is online (the Spanish version at least). I started writing it because I felt I had something to say and share with the rest of the world. There have been many changes, yes, and very likely there will be still more. The reason is that what I have to say and share has also changed or actually, evolved. I don't write hoping to make anyone happy. Of course, the more people that agree with me, the better, but I will not loose any sleep over it. Anyone who doesn't like the contents is free to say so in the comments (which I never moderate) or simply leave the page and never come back. I have no problem with that.

Never, ever I've written a single word hoping to catch the attention of someone working in the media and get a job offer. I'd be lying my ass off if I said I never dreamt or fantasised about the possibility. But it was something like the dream or fantasy many men have of spending the night with a super model. We know it'll never come true, but stranger things have happened and dreaming is for free, anyway (in my case, I hope it never comes true, I don't think my wife would be too amused be it).

Well, believe it or not, that fantasy has come true (not the supermodel one! the one about writing, you pervs!). Not long ago I was contacted by Alberto Benavídez, Chief Editor of Bar&Beer, as far as I know, the only specialised magazine written in Spanish. Alberto had been following my blog for quite some time (what I said the other day about my reputation in Spain is true) and, seeing that his magazine doesn't give Czech beer the coverage it deserves, decided to hire me. 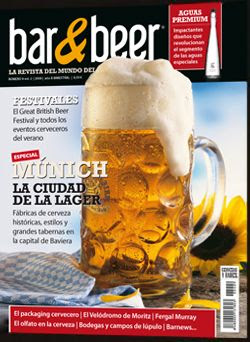 So, starting from the next issue, the readers of Bar&Beer will have (I hope) the pleasure to read my regular articles about Czech beer. I've written the first already, still needs some polishing, but I'm happy with it and I'm very happy that the people of Bar&Beer have given me this opportunity.

PS: Now that I'm a pro, is it my duty to start bitching about all them amateurs that blog about beer?