By Pivní Filosof October 12, 2009
It seems that, at least in Spain, I have acquired a reputation, and a good one at that! Thanks to it, the good people of Companyia Cervesera del Montseny thought it would be a good idea to send me some of their beers so I could review them here. Now, together with those I reviewed recently, I have a  small overview of what is happening in Barcelona.

CCM, as they like to be called, is one of the many micros that have opened in Catalunya in recent years. They started brewing about two years ago and now make six different beers, including one that is aged in French oak for no less than a year.

The three samples I got were +Lupulus, +Malta and +Negra. I loved those names! So simple, yet they can say so much about the beers and what you can expect from them. Pity they aren't given more space on the labels. But instead of talking about something as irrelevant as Graphic Design, I should get to what I do well, tasting beers.

I started with +Lupulus, a so called Iber Ale. Before building up any sort of expectations, it should be taken into account that this is not an American beer, it's Spanish. Most Spaniards don't seem to like their beer to taste very much like beer, and the macros do their best to oblige, brewing the blandest pale lagers they can pass as beer. That said, feeling any sort of hops in +Lupulus (the "+" sign should be read as "more"), and I don't mean just bitterness, but actual hops, could be considered an accomplishment. 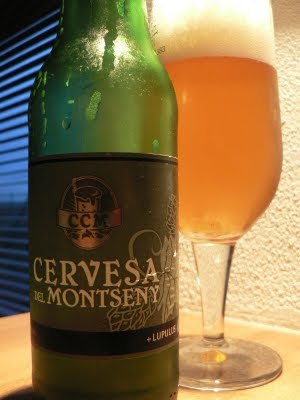 +Lupulus is palish gold, with generous and lasting white, fluffy head. To be expected for a beer brewed with Pilsen malts, as said on the back label (the web page also mentions wheat and caramel malts). The nose is full of fresh hops, very floral, very English (and it does have Cascade, Fuggles, Nugget, Target and Styrian Goldigs. I'm getting good at this!) with a malty base that gives the needed anchoring. Simple, but well balanced. The beer itself, fortunately, offers no surprise. Middle to light body. Flowers and tropical fruit set the pace well backed by the malts. The beer has some sediment that, when poured, work as a well used spice, bringing up aromas and flavours and giving them a bit more depth.

I really liked +Lupulus. It was just what I was expecting and a bit more. It didn't knock my socks off, but I found it very drinkable and see it as a great summer beer.

Second in line was +Malta, I was expecting something, well, maltier. Fuller body, less hop presence and, why not, some caramel, nuts and a roasty note or two. 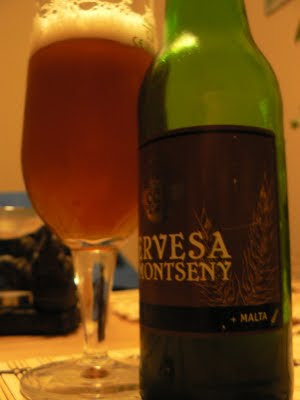 For some reason, I thought it would be darker. It poured almost orange, though. The back label says it is a Pale Ale brewed according to the traditional English style (whatever that might be). Still, and maybe because of the colour of the label, I expected something "browner". Colours aside, I didn't like +Malta, at all. Drinkable, it is. It's not offensive and I was able to finish my glass without any suffering. Its problem is that it doesn't meet any of the expectations set by the name. There's hardly any malt in the aromas and flavours (in fact, +Lupulus is maltier). It also has a very thin body with the hops carrying way too much of the tune and is not all that well balanced. Disappointing.

Last, but not least, was +Negra. With a name like that it isn't too hard to meet the expectations. Get the colour right and Bobs's your uncle. The back label says it's a Stout Ale (sic) brewed in the Irish style with three cereals, barley, wheat and oats. The web page gives a lot more information about grist: Pale malt, roasted barley, chocolate, coffee, crystal, caramel and black malts and flakes of barley, wheat and oats. The hops: Hallertau Hersbrucker (that doesn't sound too Irish), Northen Brewer y Styrian Goldigs. Quite a stew! 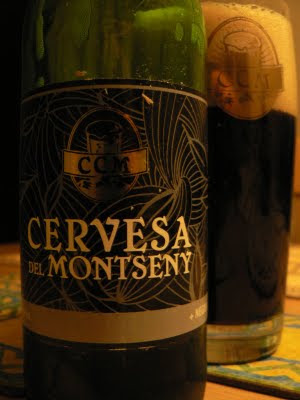 +Negra honours its name being very black, the kind that absorbs light. The same hops as before (with a minty twist) stand forward in the nose. Now the base is of sweet green apples and roasted notes. The flavour is an interesting, yet not all very well integrated, mix. There's fruit, herbs, sweet coffee, roast and the finish is rather sugary. I wasn't a fan of it at the beginning, but then, when out of nowhere came some chocolate and spice notes in the finish, +Negra slowly won my heart. It's far from perfect, but is a beer with a lot of potential. Perhaps turning down the IBU a notch or two and giving it more muscle could make it a truly fantastic brew.

I will put the overall balance in the black. I didn't like +Malta at all, but I did like +Lupulos quite a lot and +Negra, even though it's not quite there yet, managed to convince me. Now that I think of it, maybe is the latter the one they should age.

Disclosure: CCM sent me two bottles of each beer, a 330ml and a 500ml (the big one from +Negra didn't survive the trip, pity). The reviews are based only on the tastings of the small bottles. And before anyone says it, yes, it was unfair for +Malta. Why didn't I open the other bottle I had before writing the review? Why should I? I'm not a professional reviewer, I'm a consumer and the judgment I pass on a beer is, with perhaps a bit more in depth knowledge, the same as any other consumer's. How many of you would buy again a beer you didn't like?