From Barcelona with taste

By Pivní Filosof September 15, 2009
I've already mentioned this somewhere, Catalunya/Barcelona seems to be the most dynamic centre of craft brewing in Spain. In the last few years several new breweries have started offering their beers to the public, though, just as it happens everywhere, there is a bit of everything when it comes to quality.

So far I'd had only one experience with Catalan craft beers (those from Moritz don't count as they are not brewed in the province), two lagers that where mediocre at best and a very interesting ale brewed with honey and herbs. Now, thanks to María and Susana I can expand my horizons a bit. They brought me three samples, from different breweries and styles.

I started with Runa Brown Ale (5%ABV) from Ales Agullons. The other day I read an interesting article about this brewer. Among other things, it speaks about how jealous Mr. Agullons is with the quality of his beers. If a batch is not up to the quality standards he wants, he sells it cheaper, in unlabeled bottles as "cooking beer". Being that this bottle did have a label, I think it was safe to assume that its contents did conform to the brewer's standards, whichever they might be. 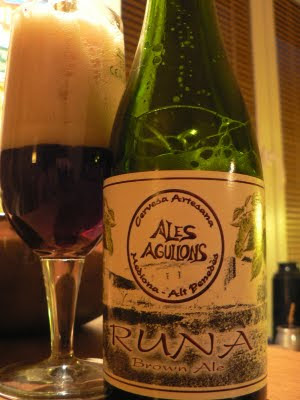 The bottle made a very loud POP! when I opened it, making me fear that there would be some serious gushing. Fortunately for our dining table, that didn't happen. However, when I poured all what came out was froth, a thick, spongy one that took ages to go down enough to let me pour some liquid. Runa turned out to be an ale of brownish colour. In the nose there's mostly flowers with a touch of mint and there, all the way to the back, trying to get some of the attention are caramel and roasted notes. That's partly because the beer was already showing the first symptoms of loosing its shape, something that could also be tasted. Still, behind that, a mild roasty taste can be felt, together with sweet caramel glazed by a pleasant bitterness that almost reminds of ripe citrus. Not great, really, but quite nice just the same. Until the finish. There is something in the finish that is not good, not good at all. The best I can come up with to describe it is "biting a burnt lemon pip". It's intense, short and very unpleasant, it does away with everything the beer was trying to do until then. I don't know what it can be, I'd never felt something like that before, but I do know it shouldn't be there.

I will give Runa the benefit of the doubt. Some beers don't travel well, and this one traveled in far from ideal conditions.

A couple of days later I went to the cellar and picked the bottle of Guineu Montserrat. I was a bit afraid that all the beers had suffered from the trip, but this one showed it was better prepared for it. 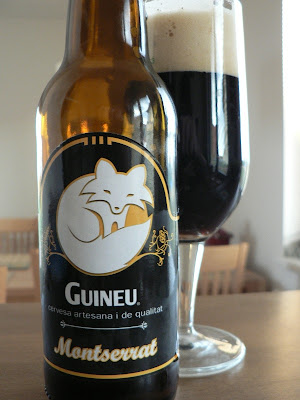 Based on the malts listed on the label (munich, pale, chocolate and caramel) I expected a dark beer, and very dark it turned out to be. It actually looked very nice, partly thanks to its compact and long living head. From then on, things got even better. I found the bouquet to be lovely, autumn fruit (sweet pears and apples), flowers, spice on coffee and chocolate, everything very well held together. And it was very interesting to drink, too. Firm, yet light mouthfeel, contrasting flavours of weak coffee, nuts, flowers, chocolate, licorice to end in a short and dry finish, quite stouty actually. I loved this beer, my favorite Spanish brew so far. It's one of those beers that, despite its 6.7%ABV, can be drunk quickly, but that you actually want to take your time to do it and enjoy everything it has to offer. I would love to have a permanent supply of it in my cellar! 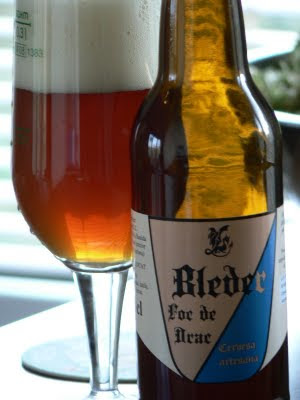 Bleder For de Drac is another pretty handsome beer, nice almost orange colour and compact head with long life. The bouquet has the same flowers as the other two (they use the same hops, I guess), now garnished by dry herbs on a background of mild honey. It's on the thin side of the track and the taste, though not really strong, is quite interesting, there is honey, roast, fruit and some sourness, all in the right measure. The finish is dry, herbal and short. Its 7%ABV can't be felt at all, really. I must say that I was expecting something a bit different, something sweeter and thicker perhaps, but I still liked it, not as much as Guineu, but I wouldn't mind having a few more bottles in my cellar, either.

The overall impression is, no doubt, much more positive than with the previous experience. Both Guineu and Bleder give the impression of very self confident beers, brewed by people who know very well what they are doing. What I liked the most was they both avoid the "extreme" gimmick to concentrate of being tasty and interesting beers.

There'll be more craft beers from Catalunya soon. I received the other day some samples a micro brewery had sent me, which I'll be tasting in the next few days.