By Pivní Filosof July 23, 2009
Not long ago I had the pleasure of meeting Martin, from the Danish beer site AllBeer. Actually, I already knew him, he was part of that group that made me feel like a celebrity last December. This time, however, we had the chance to sit down and talk. He came with some of his beer friends and we spent part of an afternoon chatting about Czech and Danish beer.

I've already talked about it, Denmark has become a very exciting place for craft beer lovers. One of Martin's friends told me how Mikkeler, I think, is experimenting with spontaneously fermented beers. Not in the Belgian style, but based on Nordic legends that tell how beer was brewed thanks to the god Thor spitting in the fermenters. The interpretation is that the celestial flog implies a spontaneous fermentation. Interesting.

They brought me two beers, one of them Brøkhouse Julebrygg 2008 is still in my cellar awaiting more appropriate weather, the other didn't last very long.

The Stout style traces its origins to London Porter, a beer that used to be dark brown. The term Stout was used as an adjective for stronger Porters. In fact, there was a time when the it was applied to all kinds of stronger beers, even in the 19th century there were Pale Stouts. Nowadays it seems that, at least in some cases, the difference between Stout and Porter is a lot less than many believe.

All that is to explain you why I was excited when I saw the label of Limfjords Porter - Double Brown Stout, from Thisted Bryghus. Was I about to have the opportunity to taste a Stout brewed the old way? 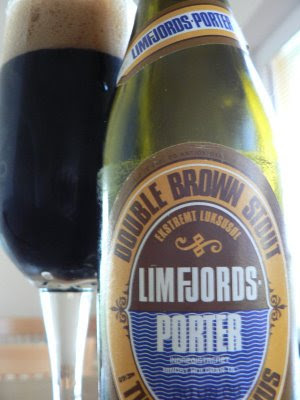 Well, though I can't say I am 100% sure, I very much doubt it. Firstly, because the list of ingredients includes rye malt and English licorice and secondly, because the beer pours very, very black. There is some sourness in the bouquet, some nuts and cocoa as well. It's full bodied and dry, mostly very, very strong espresso together with a sprinkle of cocoa. The finish is roasty sour. A couple of sips later the beer becomes a scene in a porno film, quite fun at first, but then repetitive and boring (at least so I've been told). With 7.9%ABV and such intense taste it isn't easy, nor advisable to fast forward it, so the half empty glass ended up as something to distract me while I was preparing dinner. If it'd had chocolate instead of cocoa, Limfjords Porter could have been a memorable beer, unfortunately, it isn't. Anyway, I still see it as a very good pairing for a thick, greasy, spicy game or mutton guláš.