By Pivní Filosof July 27, 2009
Pivovarky Staropramen have decided to axe Kelt, a Stout-like dark lager that, until Primátor Stout came to the market, was the only local alternative to overpriced Guinness brewed who knows where. I'm not going to say that I'll miss it, but it wasn't a bad beer at all, it was actually pretty drinkable.

(Curiously, Kelt had their peak in sales in 2004. That year the Belgian Interbrew (the owners of Staropramen) merged with the Brazilian AmBev to spawn our beloved InBev. I wonder if the subsequent increase in the marketing for Stella Artois had anything to do in the decline of Kelt's sales)

The reason the Smíchov based brewery gave was: "“We see greater potential in our other brands.”

I remember reading sometime ago that the local chapter of InBev was planning to promote Hoegaarden more aggressively this summer. We're already at the end of July and I haven't seen much really. Who can blame them. AB-InBev has put their Czech subsidiary for sale and perhaps they don't want to invest in promoting a brand that might not be on the market in the near future.

The other brewery of the group in the Czech Rep., Ostravar has recently come out with Bazal, a beer "designed" by 121 fans of the football club Baník Otrava. Great potential that brand has. Yeah.

What else have they got up their sleeves? Oh, yeah, this: 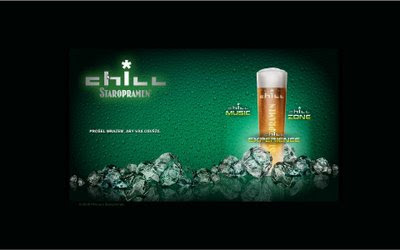 Chill Staropramen. With this product, the folks from Smíchov, maybe inspired by Heineken, are finally confesing, though in a somewhat indirect way, that their beers is so crap that it's not worth tasting.

According to this abomination's web page, the swill will be dispensed from a frozen tap into a think frozen glass because that is the best way to fully concentrate the aromas and flavours (I wish I was joking on that). Apparently, this product is aimed at discos and clubs so people will drink it as a refreshment.

The page also says that the beer is Staropramen Ležák (a.k.a. Premium Lager). Considering that at "Chill" temperatures nobody is going to be able to feel any taste (not a bad thing in this case), what will prevent Staropramen from filling the kegs with lefovers from Braník or Staropramen Světlý (I suspect those two are the same beer with different label, I should check that with a blind tasting, but I'm not such a masoquist)?

Chill Staropramen, another product with a great potential.