By Pivní Filosof February 11, 2009
I'm not very keen on talking about beers I don't know, but this entry in Hipos Urinatum (SP) gave me some food for thought, so I will make an exception.

Damm is a very important Spanish brewer, with a rather big product line, a couple of them quite interesting, like Voll Damm and Inèdit.

The, I believe, latest product of the brewery is called Saaz. What a nice name for a lager! It's incredible that nobody had thought of it before (yeah, there is Pivovar Žatec, but it's not the same semantically). The name is not just a marketing whim, according to the brewery only the world famous hops from Western Bohemia are used in this beer. 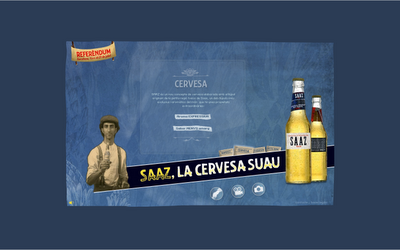 But before any of you goes running to buy some bottles of Saaz Damm, there are a couple of things that you should take into account, as a warning. Firstly, it comes in a white bottle; so far all light lagers (this one has 3.5%ABV) in white bottles that I've seen want to compete with Corona, and that is never a good sign. Secondly, their marketing strategy; I will ignore the pathetically demagogic "referendum" to focus on how this beer is being sold, as a beer for those who don't like beer. Now, I've got nothing agains getting more people to drink beer, but what this marketing gurus seem to ignore is that beer isn't just a "yellowy drink served very cold and with a rather unpleasant bitterness". Fortunately, beer is a lot more than that, and, if someone is willing to look for it, there is something for pretty much every taste. 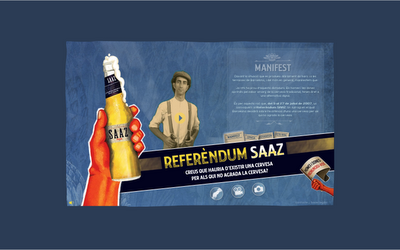 But to me, the biggest nonsense about this beer is its very name. For those who don't like beer (and also, for many who do and even consider it their favourite drink) the word Saaz, and the subsecuent explanation, does not bring any added value to the product. Those who could perceive it as an added value, though, aren't the ones who would buy the beer, at least no more than once if I look at the very poor reviews it has received.

Wouldn't it be great that if instead of spending so much money on empty marketing, they spent it on improving the quality of their products?