By Pivní Filosof February 01, 2009
The first time I heard of Baráčnická Rychta was after posting "Some serious beer hunting in Prague" (which, by the way, I should update a bit). A couple of readers left comments recommending this pub.

It took my a whole year to finally be able to go and see what it was about. I don't go too often by Malá Strana, and this hospoda is so well hidden that I don't really think I would have found it just by chance, as it's happened with many others. It is in an alley very near the American embassy, metres from Nerudová, the most touristy street in the quarter. It doesn't announce itself with signs trying to bring foreign visitors, as many other restaurants around do, and that is something I like, more so if the beer they stock comes from Svijany.

Having a bit too much time to kill one afternoon, and my camera in my backpack I headed there. It took me awhile to find it, I took the wrong alley off Nerudová coming down from the castle. I went all the way to the gates of the American embassy and tried to get my bearings. The street Tržiště widens there in the shape of a triangle, from which three narrow lanes fork, the last one on the right is the one that should be followed. When it seems that the alley will dissapear behind a bend the name Baráčnická Rychta can be seen painted on the side of a building. The entrance is marked by signs of Svijany and Pilsner Urquell.

It was mid afternoon, the room was practically empty. Shortly after taking a seat the waiter came to bring me the menu. I ordered a pint of Svijanský Máz, they also tap Svijanský Kníže 13%, Svijanská Kněžna (tmavá 13%) and Pilsner Urquell (but why bother with this one), and a utopenec. I started taking notes while I waited. 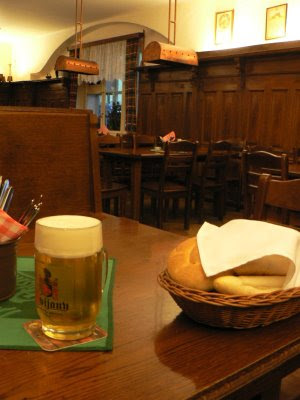 Baráčnická Rychta reminded of a Bierstübe. Wood panelled walls, on one side, cubicles, also wooden, with solid looking tables surrounded by benches. On the other side, very classic looking tables and chairs. The atmosphere is warm and welcoming, though the lack of a visible bar, with its taps and bottles, is missed a bit.

My beer arrived. I hadn't drunk the 11ª from Svijany for a long time. It was so well tapped! The head was so thick that you could almost eat it with a spoon, the body, fuller than I rememberd. It still tasted fruity with slight undertones of caramel and a mild bitterness by the end. In my books, an excellent session beer by all means, and at 30CZK a pop, in Malá Strana, not at all bad. 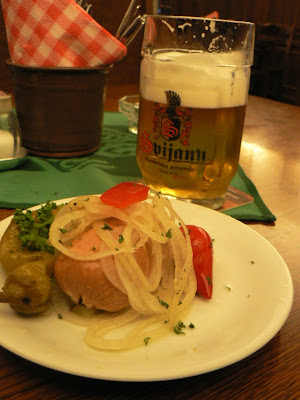 The food is not on the cheap side, e.g. 120CZK for a guláš, though prices are not so outrageous once you consider location; and the guláš that was brought to a nearby table looked pretty good. My utopenec wasn't cheap either, at most hospody in Prague this typical beer snack of pickled sausage dressed with onion and peppers goes for around 30CZK, here it was for 55CZK plus bread. Fortunately, it was very good, the sausage was very tasty and there were plenty of very well picked onion slices. As expected, Máz went wonderfully with this delicacy.

The service might have been a bit slow, but it was good, though I sure hope they have more people when the attendance is higher. The waiter did speak some English, but the best was, specially for those with kids, that this is a non smoking place. I've got nothing against smokers, but lately it's been bothering more and more to end up smoking like a well aged ashtray after having only a quick beer. I'm getting old. 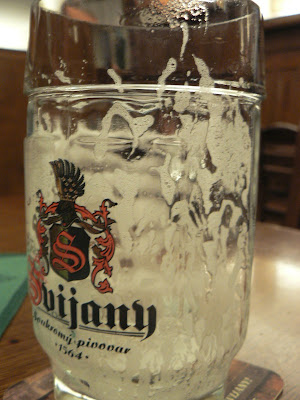 I finished my second pint, unfortunately, it was time to go on my way. I would have liked to stay for a couple more, perhaps reading a good book. It will have to be some other time. Baráčnická Rychta is more than recommendable. It's ideal for sitting down and having a good beer, while escaping from everything without having to go too far. 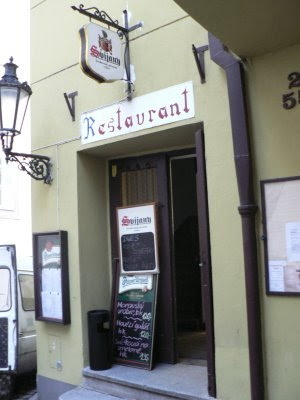