By Pivní Filosof September 26, 2008
Though many seem to think so, I am no beer expert. Yes, I do know more than the average person, but that is mostly thanks to my curiosity and the fact that I pay attention to what I drink, but that does not make me an expert. For example, I don't know as much as I would like about brewing, something that I hope to correct soon, once I start making beer at home, which is, I think, the best way to learn.

I know even less about pairings of food and beer. I don't think it's a science, it is more about experience, memory and some common sense, and also, trial and error.

With this Philosphy in mind I decided to try pairing a Fuerteventura cheese and a beer. Fuerteventura is a goat cheese from the namesake island, one of the Canaries. Its texture, consistency and aroma are very similar to some very cured Manchego I've had. It is also similar in taste, though Fuerteventura might be a little stronger and spicier, the latter due partly to the crust coated in spicy paprika powder, which gives the cheese a very particular character. I really like it a lot.

What beer could I drink with it? What beer could tame it a little? I had already eaten it with some Svijanský Rytíř and the cheese quickly overwhelms the beer, which does atenuate a little the wilder notes of Fuerteventura, but ends up lost among that much fire.

I remembered then that I had a bottle of Primátor Double 24%. I smiled and put it in the fridge for an hour or so.

The restult was brilliant. Double is a really sweet beer, with intense licorice notes, together with burnt sugar and some chocolate, at times is excessive. But they got along wonderfully with Fuerteventura, as if they had known each other all their lives. Each enchanced the best of the other. The beer made it easier to eat the cheese and the cheese made it easier to drink the beer, without either of them loosing their identity. It is interesting how a cheese made on a dry, inhospitable island in the Atlantic Ocean can pair so well with a beer brewed in the temperate and wet North East of the Czech Republic. 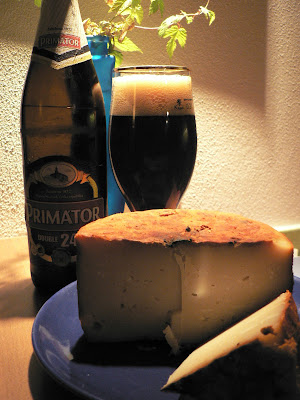 I don't think you can find this cheese here. I got it thanks to María Angeles and her friend, who brought it (together with a bottle of Dry Malvasía) as a thank you gift for the advice I had given them through private messages in Los Viajeros forums before their trip to Prague. I'm not expecting people to bring me presents, but I am not going to dissuade them either.