Heavy hand with a silk touch

By Pivní Filosof September 19, 2008
The first time I tasted Jihlavksý Grand I was not too impressed. It was on the opening day of Pivní Festival Praha. I felt it a bit out of balance. Evan insisted that it was very good, so I gave it another chance when I went to the festival for a second time. To be honest, I don't remember it very well, in fact, I'm not even sure I had it at all, there are several things that are a bit foggy in my memory from that day. But that's another thing.

Most Czechs, and not few foreign residents, maintain with almost religious fanaticism that all beers are draught. It is true in many cases, yet not so in some, specially when it comes to stronger beers. It is as if the more confined space of a bottle makes the elements and characteristics of the beer to integrate in a more compact way, with the result of a more balanced and better tasting brew. Jihlavský Grand is a great example of this.

When pouring the glass is filled by almost orange gold, cristaline, with very fine bubbles and crowned by quite a bit of a white head that, to my surprise, doesn't disipate very fast. Its nose is dry and intense, with some whisky notes. The dryness is still there when drinking, feeling like orange peel. The 8%ABV can be felt, but does not disturb, it is just another element that gives character to the drink. In the finish there is mild vanilla and perhaps some wood, the aftertaste is the same as at the beginning. Very good beer, very well made, one of those to drink slowly in the afternoon, or to pair with some Asian dish. 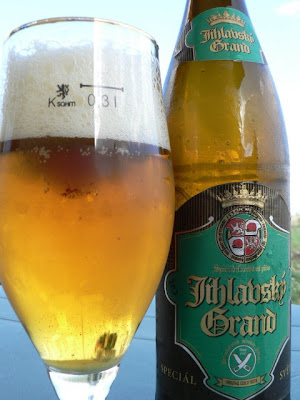