By Pivní Filosof October 07, 2019
On Wednesday morning, the ghosts of the previous evening’s Kveik haunted every room of our house and there was no open window that could drive them away. After breakfast we all tacitly agreed on going outside, closing the door behind us, making me feel almost of Cortázar’s short story “House Taken Over”. Not that we minded, we all marvelled at the sight of the water in the fjord covered in fog while the sky above was completely clear.

Sigurd came for us shortly after, at nine. He had woken up much earlier, though, to the get juniper infusion going. When we arrived at his place, the cellar was warm and smelled lovely. The infusion was cooking in a 150 l copper pot on top of a wood burning stove. Sigurd explained us that it needed to reach about 95°C before anything could be done with it, and that other than feeding the fire and checking the temperature every now and again, there was nothing to do, at least in the cellar. 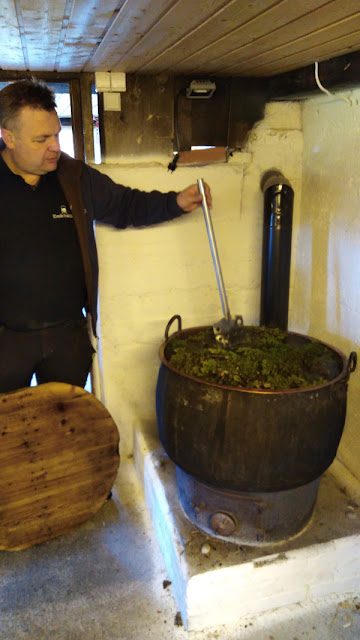 Certain that it would still take awhile to reach the required temperature, Sigurd grabbed a bag of pale malt (the only kind we would use) and we followed him to the barn, where he keeps a grain mill dating probably from the 1890s (converted to an electric drive now), which has been crushing grain for Sigurd’s family for at least four generations. 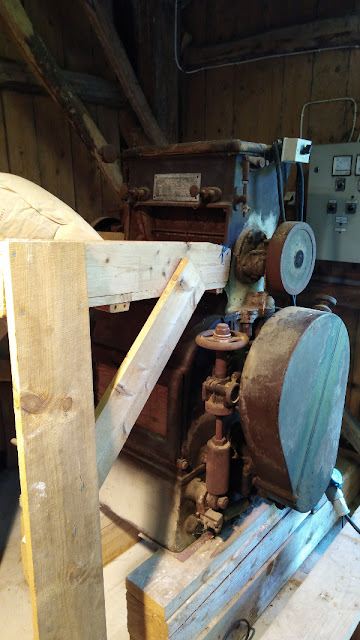 With the malt ground, we went back to the cellar to get the rest of the gear ready and squeaky clean, namely, two tall metal containers – the mash and the lautering tun – a couple of metal buckets and saucepans and the wooden spoon we’ll use to stir the mash, which was brand new. The previous one had snapped in half during while brewing the last batch, after having served for more than a century. The new one had been carved from alder wood by one of Sigurd’s neighbours. Before using, it head was dipped in the juniper infusion to sanitise it.

We were all eager to help, either with cleaning the gear, chopping the alder wood and the rest of the juniper we had picked the day before (only about half of the juniper was cooking), and more, which surprised our host. The other groups he’d had would just stand around watching him. Quite silly, if you ask me. After all, the best way to learn a craft is to actually do it!

I’ve always found ridiculous the claims of some Craft Breweries that their beers are ‘hand made’ (it’s like the ‘carefully selected ingredients’ mantra, but for small breweries). Proper hand made beer is what we started making once the juniper infusion reached the right temperature. Granted, this is, after all, a home brew; regardless, with the exception of grinding the grain, everything was done by hand. The liquor was delivered to the mash tun with a bucket and mixed with the grain using the aformentioned wooden spoon. Not a single valve in sight. 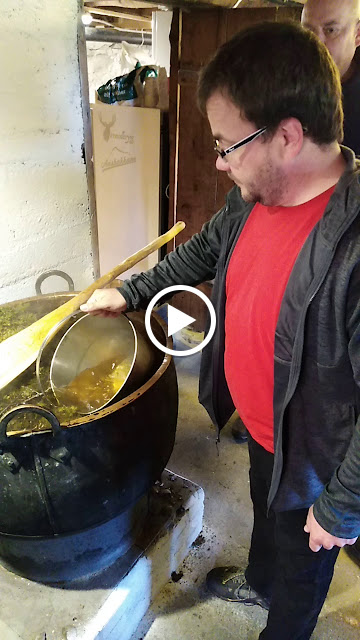 The process was repeated until the right consistency was achieved, indicated when only a couple of drops fell off the spoon when it was taken out of what now was a porridge. After that, the tun was covered with a cloth, and the mash would have to be left to rest for about an hour for the enzymes to do their job. Interestingly, its temperature was about 65°C. 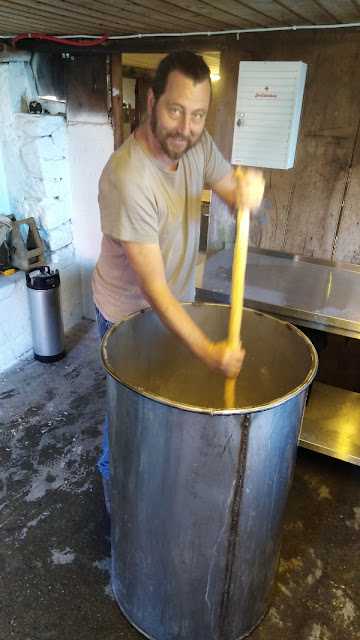 It was time for lunch and Julie had prepared a feast for us with smoked trout and trout marinated in cognac, reindeer sausage with juniper spice, venison sausage, and venison roast served cold, among other things. The sausages and the trout was sourced from small producers in nearby locations and the deer for the roast had been hunted by Sigurd himself and prepared by his wife. The food looked so good and tasted so wonderful that nobody bothered to make a picture, so all I can show you is the empty plates. 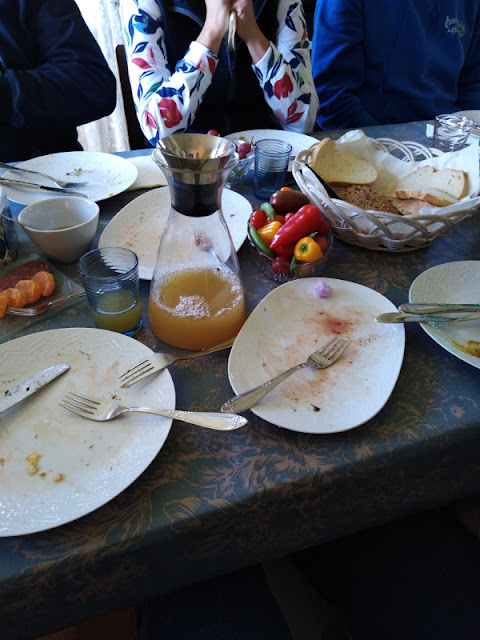 Feeling very happy with our lives, and enjoying the sunny warm weather, we slowly went back to work, to prepare everything for the sparging, namely, sanitising the tools, and chopping the alder wood and much of the rest of the juniper, but this time, only the needles. 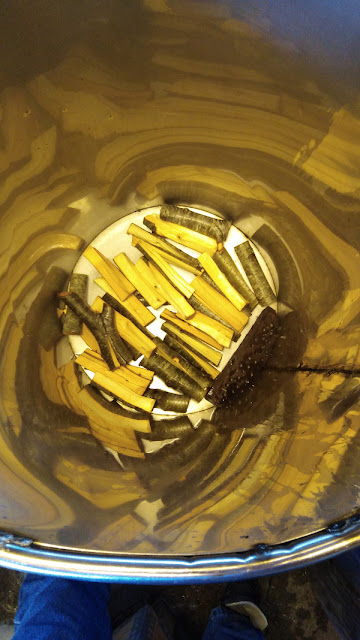 The wood was washed and placed on the bottom of the tun, around and over a metal strainer, and the juniper went on top. The purpose of the wood is to prevent the juniper from clogging the outlet (and to add some flavour as well), while the juniper itself worked as a filter. 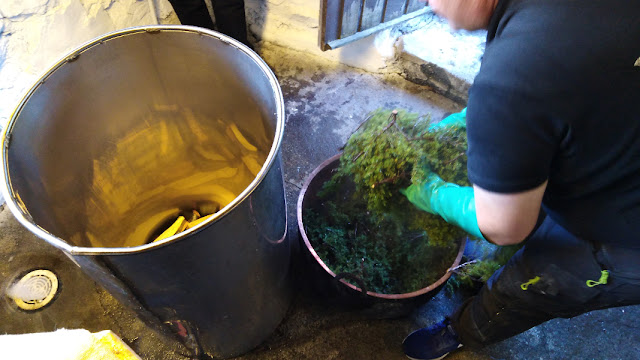 As previously, things had to be done by hand. The mash was transferred to the lautering tun using a saucepan. Then some more juniper infusion was added and the mix was left to filter for one hour. 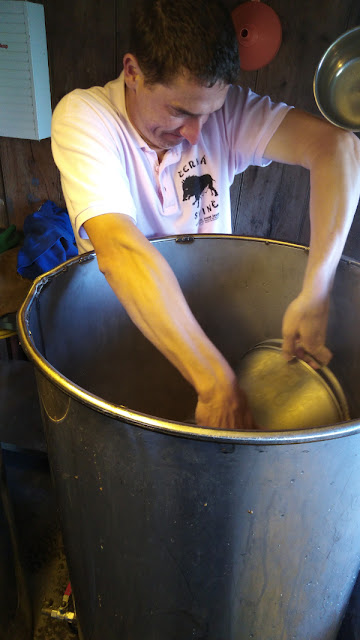 During that time we went to see a small and ancient looking stone cabin near Sigurd’s place. Other than its walls being made of piled-up rocks without any mortar, the structure is quite unremarkable from outside, and the inside, for that matter. It gets interesting once you know its history: it was used to dry malt. The green malt would be placed inside, on perforated trays above a slab of stone that was heated from the bottom with firewood. The heat radiating from the stone would dry the malt, while the smoke went around the sides of the device. But the entire malting process was interesting, and, as with everything related to traditional Raw Ale brewing, very rustic, too. After the harvest, the barley would be put in bags, but only half full. The bags would be taken to the nearest river or creek, where they will remain for three days. In modern malting, after a certain number of hours of soaking, the grain must be taken out of the water ‘breathe’ for the same amount of time. Here it wasn’t necessary because the water in the river is in constant motion and therefore has a permanent supply of oxygen. From the river, the grain was put to germinate, but not on the floor, as a Czech or Bohemian floor maltster would do, but in devices that hanged from the ceiling of the farmhouse cellar. And then it was taken to the communal kiln I mention above. 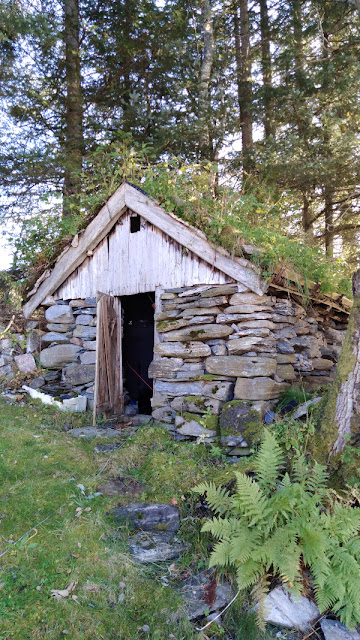 When we returned to the brewing cellar, the ‘first wort’ was rested and filtered and, while we completed the lauterinng, we got things ready for the next step, fermentation. This consisted in sanitising a copper pot that was placed by the tap of the lautering tun, sanitising the mash tun, which now would be used as a fermentation tank, getting a hop infusion going and waking up the Kveik from their slumber in the freezer. 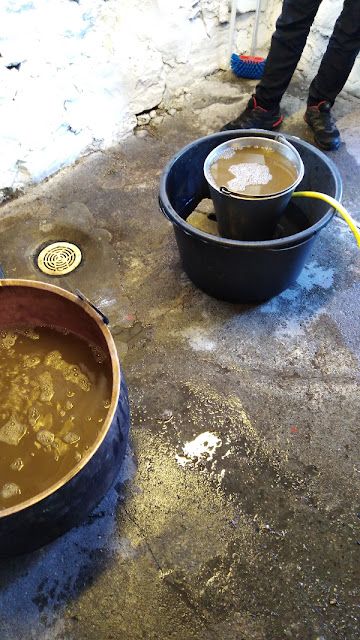 Sigurd usually makes two beers with each batch of wort: a big Raw Ale and what could be described as a ‘Small Beer’, the brewing of which is completed with a more conventional process, often using also berries or other ingredients. The wort for the big Raw Ale is extracted until it reaches an OG of about 1050. The first gravity measure was 1120 or thereabouts and the whole batch of 50 litres had an OG of 1080. Before the use of the densimeters, the practice was to taste the wort coming out of the lautering tun every 15 minutes or so, until it no longer tasted sweet, or barely so (we tasted the first wort and it was incredibly sweet and rich, and the last, in comparison, tasted quite flat).

As it fills the copper pot by the lautering tun, the wort is filled into buckets, which in turn are taken to a cooling system that consists of a basin filled with running cold water where the bucket is put until the temperature of the work goes down to 35°C. Each bucket is then taken to the fermentation tank and then added the hop infusion (which had brewed at 95°C for an hour) and some melted candied sugar are added to it, before pitching the Jæst. Now it’s up to the yeasts to do their job, and they do it very quickly! The fermentation is usually completed in 3-4 days, sometime less, with an attenuation rate of up to 90%.

We closed the day with a dinner at Raus, a welcoming, modern restaurant by the Sykkylven’s marina, with impressive views, superb food and a fairly decent beer list for small town place. It was a very pleasant evening capped with gin-tonic made with the product of the local distillery.

The next morning, Sigurd came early to pick us up. We had a quick look at our beer. It had been fermenting fervently since the evening, a few hours after we had pitched the yeast. 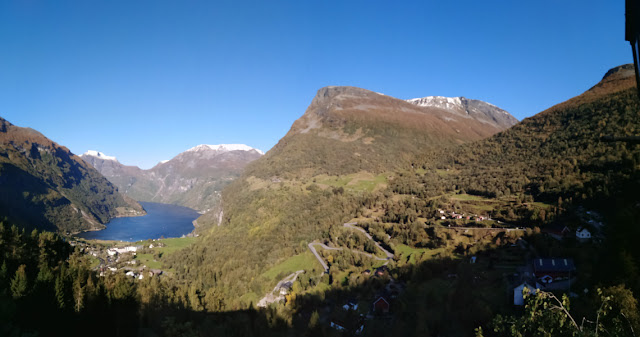 Having said good-bye to the ale, and to Julie, we got back on the car to go to Geiranger, one of the most popular tourist destinations in Norway, located at the end of a deep fjord. In addition to stopping a couple of times to make loads of photos of the spectacular panorama, we visited the local brewery, Geiranger Bryggeri, where we were greeted by Jakob, one of the owners and head brewer, who, besides answering all our questions and showing us his shop, gave us two of his beers to taste – one of them brewed with Kveik – both very good. It’s a pretty small operation with a three-piece brewing kit with a capacity of just above 10 hl. Much of the production is sold locally, but their beers can also be found in the state-run chain of bottle shops. 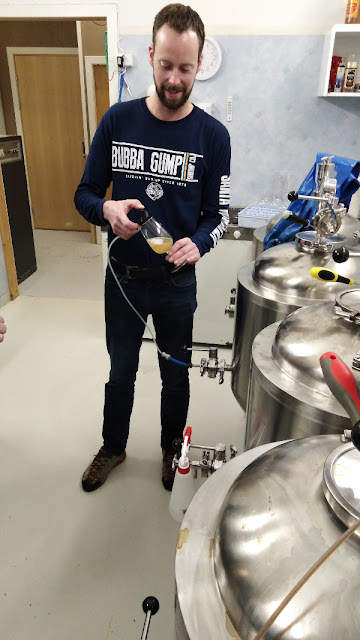 We still had some time and what better way to spend it than having a few beers, from the local brewery at a local spot. Confirming what we’d just had at the brewery, the Geiranger beers were of outstanding quality, with the exception of the IPA, which was probably old. I even enjoyed the strawberry sour! Maybe because it didn’t taste like rotten beer or vinegar. 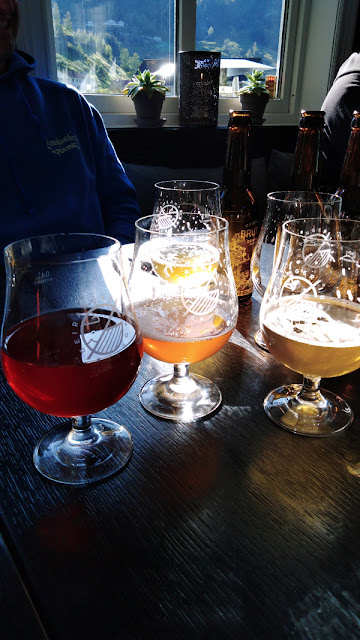 From there, Sigurd took us to the Ålesund airport to take our flights back home. It was an amazing trip. Without any doubt, one of the most interesting beer experiences I’ve ever had and I want to thank all the people that made it possible. And, on behalf of everyone in the group, I also want extend my gratitude to Sigurd and Julie for their hospitality, the beer, the food, and for sharing their passion with us.