PIvní Filosof in Norway. Part I - Juniper and Tasting

By Pivní Filosof September 30, 2019
It all begun one afternoon in early June, when I got a call from Milan Starec (a.k.a Květak), from Černokostelecký pivovár, asking if I wanted to help him with project that could get a grant from the Norwegian government. Its purpose, he explained, was to establish partnerships between Czech and Norwegian people who practice traditional trades and crafts. Naturally, Milan wanted to focus it around beer and brewing. I told him I’d love to and that I knew of someone who could help us.

Immediately after finishing the call, I sent a message to Lars Marius, a beer writer from Norway, author of a great blog on farmhouse ales from his native country and beyond and a couple of books, too. He gave me the contact so Sigurd Johan Saure, who runs Kveik Training. His family has been brewing with Kveik (or Jæst, as it’s called in the local dialect) for many generations (Sigurd remembers helping his grand father and uncle when he was a child, at the very same farm where he lives, and teaches, today).

Before continuing, however, I think I should provide a brief and basic explanation of what Kveik is (though I encourage you to read Lars’s blog, he’s the real expert). Essentially it’s a family of yeasts with some interesting properties, the most remarkable of which is, perhaps, the temperatures at which they work best, over 30°C. Unlike the yeasts used today, they don’t come from labs. They are akin family heirlooms passed from one generation to the next since Grimnir knows when. After every brew, they were raked and dried until they were used for the next batch. If, for whatever reason, the Kveik refused to work, all the brewer had to do to sort it out was to go to the neighbour’s to borrow some of their yeast, just as you would do with sugar. The brewer then would mix the neighbour’s culture with his own and problem solved. This custom has also resulted in some Kveik cultures to be a mix of almost a dozen different strains of saccharomyces cerevisiae, all fermenting happily together.

Traditionally, and, for more than eight centuries, mandated by law, there were two brews every year: one in autumn – a rich and very strong ale not only for Christmas but for the entire winter – and the other in summer, a light ale for the field workers. The law also required the farmers to grow (and malt) their own barley, as well as the hops, for those that used it. But when the law was repealed in the late XVII century, the farmers continued with the custom, still feeling the obligation to brew at least twice a year. Though the processes could vary from one farm to the next, the most typical ‘style’ was the Raw Ale (because the wort isn’t boiled) brewed with juniper.

Now that you know the basics, let’s continue with the story.

Sigurd was more than eager to help us and, after the grant application was approved, I was invited to join a delegation from Černokostelecký pivovár and Pivovar Dalešice on a trip to Norway late last month with the purpose of learning to brew with Kveik. 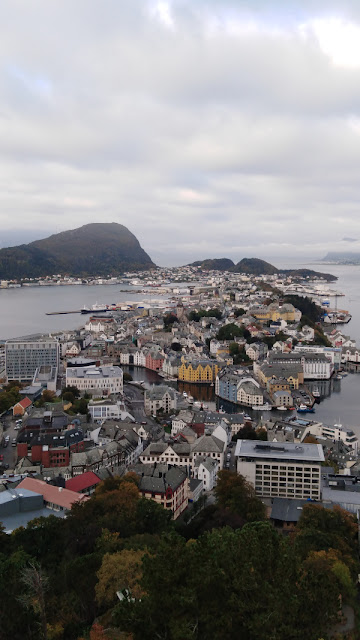 We arrived in Ålesund on a Tuesday morning, after an overnight stopover in Oslo. Sigurd was waiting for us at the airport. He showed us Ålesund, where we couldn’t linger for more than a few photos. From there we drove to Sykkylven, a small town about 20 km away (counting the impressive ferry crossing from one shore of the fjord to the other). By the time we got off the ferry, the skies had fully cleared, heralding the gorgeous weather we would enjoy during our stay.

Our host lives in a hamlet of farmsteads just outside Sykkylven, in a place that can be described as idyllic, at least when the weather is sunny, surrounded by hills and woods, and with breathtaking views to the nearby fjord and the mountains that surround it. 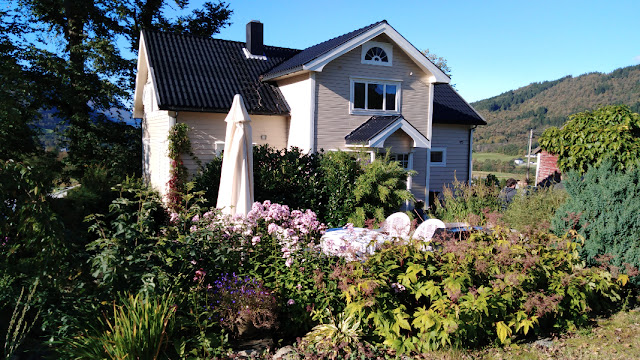 Though his house dates from the 1880s, Sigurd’s family has lived in that spot since the late XVI century. In the past, his ancestors lived in a group of houses arranged in a circle, each belonging to a family, and all very close to each other. In 1850, the government instituted a land reform which, in a nutshell, consolidated all the fields farmers owned in a given area into a couple of larger plots of land that in total had the same area. And that’s how Sigurd’s farmstead came to be. 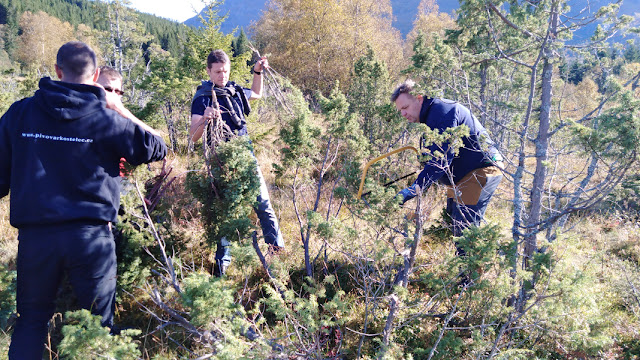 After a hearty lunch prepared by his wife, Julie, Sigurd took us a couple of kilometres uphill to pick juniper and get some alder wood for the next day’s brew. We came back with a full trailer and we sat in the garden to have some home made beer while we waited for our accommodation to be ready. That’s when I had my first contact with a Kveik Ale, brewed with juniper but with a boiled wort. It was amazing! It had notes of green wood and spice that reminded me of Szechuan pepper without the burn, but they weren’t overpowering. It still tasted like beer thanks to its sufficiently muscular malt base. 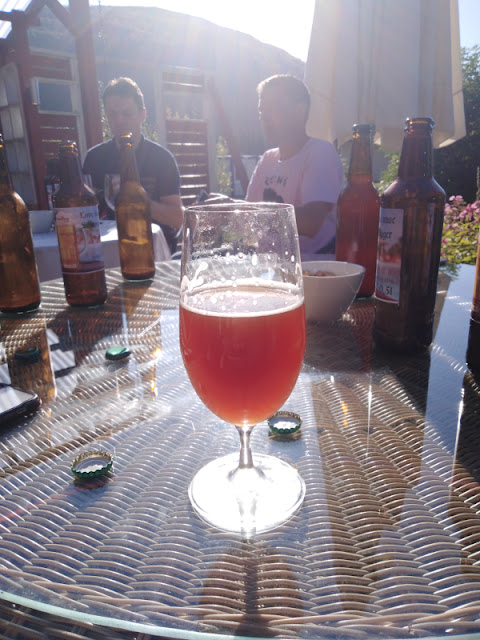 That evening, after visiting a gin and akvavit distillery and dropping our stuff at our sleeping quarters, we had a tasting at Sigurd’s cellar (and brewery). The first round was six samples of the same basic recipe, one brewed with US05 yeasts and the rest each with a different culture of Kveik. The differences were so marked that even an untrained palate could detect them paying just a little bit of a attention. They were followed by two samples of a Raw Ale, one served at room temperature and the other, flash warmed in a saucepan; I loved both. For some reason, I expected the Raw Ale to be sour; it wasn’t. It was earthy and full bodied, a tad funky, perhaps, and very smooth, especially the warm sample, which was also maltier and sweeter. I could spend a whole evening drinking that, and happily, even knowing I would much regret it the morning after. But the best was yet to come, when Sigurd produced a kettle-sour Kveik with raspberries, brewed with the 'little mash' of a heftier Raw Ale. As some of you may know, I don’t like sour beers, but this one is one of the very few and rare exceptions; maybe because I didn’t find it sour. It tasted rather like a top shelf, fruity rosé with just the right acidity for balance. We all loved it, in fact. The last beer we tasted was a Kveik Porter. Unlike the previous, it got mixed reviews. I enjoyed it. It had notes that reminded me of gingerbread spice. Perhaps we were all tired by then. It had been a long day, after all, and the next one promised to be long enough, too; we would brew a traditional Raw Ale. 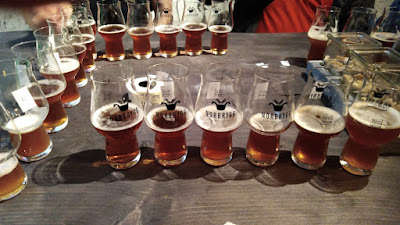 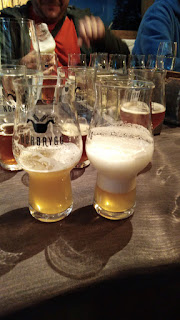 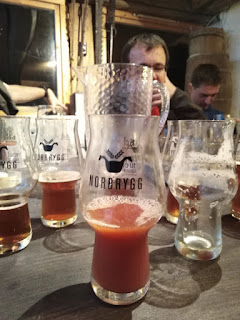 (Disclaimer: The invitation I got covered all expenses. Sigurd, on the other hand, got paid. The package he offers, in addition to the brewing course, includes a tasting, accommodation, and lunch and dinner on the brewing day. He did give us a discount and was very generous to show us around. We will reciprocate when comes over, hopefully soon)