For some time, I've been calling brewers to be more open about their products, to tell us more about the ingredients that make a beer, instead of putting empty words or fantastic tales on the labels, because I believe that would help us make a more informed purchase. No I'm not so sure... 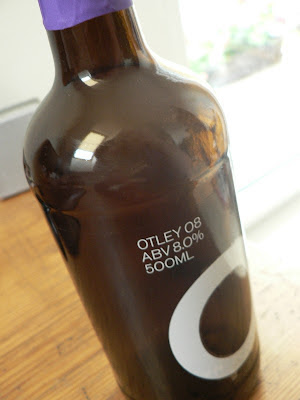 The other day I fancied opening the bottle of Otley 08 my Welsh friend David brought me last May. The beer is superb, complex, intriguing, it doesn't need to scream, or even speak in a loud voice, to surprise you and absorb your attention. At one point, there in the back, I felt the distinctive notes of peated malts. I went to the kitchen to fetch the bottle to see if there was any mention of them. Let's just say that the information about the ingredients is as minimalist as the branding. I complained to myself a little and had another sip. It was then that I realised that I was feeling those malts, or at least I was feeling something that strongly reminded me of them and that it was something that would not change regardless of what the label said or didn't say, and I was happy with that. (I didn't even go the company's website to check it out).

While I was slowly working my way down the glass, I started to wonder if, in some way, it wouldn't be better to have less information. Perhaps it could be more fun. If the label of Otley 08 had said that it had been brewed with peated malt, I would have known what to expect, in fact, I could have even been disappointed! The peated note was a bit like the bass guitar line in a rock song, which was actually one of the things I most liked about this beer.

I haven't made up my mind yet.

What I have made up my mind about is that brewers should perhaps refrain from mentioning styles in future beers, even if they are within the institutionally accepted parameters of a given style. Pivní Recenze's review of Mikkeller-Revelation Cat Cream Ale is a good example of why I'm saying this. According to the reviewer, the beer is fantastic, but has a "problem", it doesn't fit the style, which results in fewer points being awarded. I'm not going to argue Gum's criteria when evaluating beers, it's his thing, and I respect it. However, as I've said before, I believe it is the style that should fit the beer and not the other way around. But I'm digressing, what I wanted to say is that, if styles weren't mentioned people like Gum would be able to enjoy a beer for what it is, without having to worry about what they believe it should be.

But well, after several years of reading historical tables in Ron Pattinson's blog, I've reached the conclusion that styles (or actually, what we today understand as such) have always been not much more than labels. It is only recently that a niche within a niche has been taking them as a determiner. All this makes me thing that what is happening today with IPA is, perhaps, something natural from a historical standpoint (with the addition of the urging need of geeks to caterogise and subcategorise everything).