By Pivní Filosof June 01, 2011
By the time U Vodoucha opened I was already on the last leg of the work with my book and I had already closed to door to any new additions. I wasn't able to visit it, either, all the time I had available then was devoted to making the remaining photos of the places that would be included in the Guide. I still wanted to make it there, though, all the comments I'd heard about this new pub in Vinohrady had been very good and I promised my self that this would be the first place I would review after publishing the book. (a promise that I obviously didn't keep.

Let's start with the weaker side, the beer list. U Vodoucha has ten taps, more than half of them reserved for beers from K Brewery, the rest for micros from different parts of the country. So far, so good. However, with the exception of the excellent Majový Ležák from Dalešice (a polotmavé), all the beers that they were serving on both my visits were Pale Lagers of one Balling graduation or another. No dark beers, no wheat beers, not even Velen that lately has been in great shape. All the beers I tasted were really well served, yes, but I missed a bit of variety. Though, to be fair, since most of the taps are also rotating, it might be that I was unlucky both times.

Anyway, as I've said the other day, a pub its much more than the length or diversity of its beer list, there are a number of other factors that make a good pub, and fortunately, U Vodoucha hits the spot with all of them. 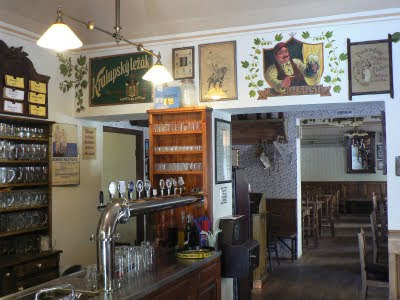 The place itself is pretty nice. Located at a quiet corner only 3 blocks from Vinohradská. The decoration has a style that I associate with the First Republic (the period between the Independence in 1918 and the Nazi occupation in 1938), but not in the way that is recreated by some posh (or wannabe posh) restaurants in the centre, this has a rural or small town feeling, or at least that is the vibe I get. Either way, it makes you feel comfortable almost as soon as you take a seat. 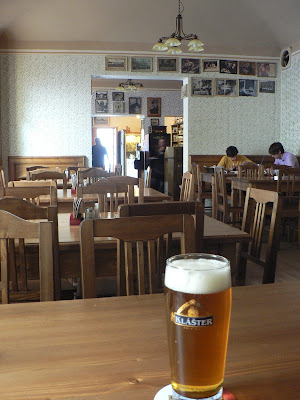 This feeling increases thanks to the service. It was great both times I was there. The two waitresses and the výčepník were attentive, nice and even friendly, but not in a "I must follow the corporate manual as if it was sacred word" kind of way, but in the genuine way of people who simply like doing their job well. On the other hand, my visits were during the early afternoon and the place was very quiet, so I have no idea how much the service changes when things are busy (though, it often happens that the fewer the people, the lazier the staff). Regardless of that, I really liked when the výčepník came to my table to see if I fancied another beer (yes, thank you very much) and was also quite happy to recommend me one from the list. 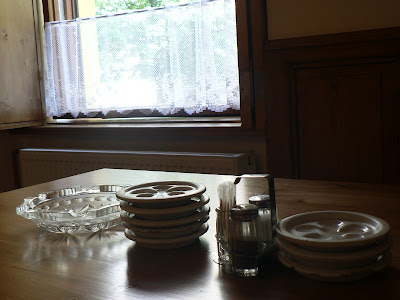 The food doesn't disappoint, either. No fancy, trendy stuff like Caesar's salad, proper česká klasika, which means proper pub grub. The owners of U Vodoucha are also owners of Černokostelecký Pivovar, one of those many places I am yet to visit that happens to have a very good reputation, and if you can eat there as well as here in Vinohrady, a visit might very well be worth it.

The dršťková polévka I had was superb, really tasty, well spiced, thick enough; the kind of food that makes you feel better about the world. If it had been a touch spicier, the Pivovarský Guláš would have been close to perfection. The menu said it was made with dark beer, and it could be felt, but very well integrated with the rest of the ingredients. The meat almost melted on my tongue. Even the knedlíky tasted like really home made and not something that had been bought at the nearest Tesco. They were firm, chewy, tasted fresh and wouldn't dissolve in the sauce, they absorbed it with gusto. I could have done without the raw peppers, but you don't have to eat those and my belly ended up very jolly. 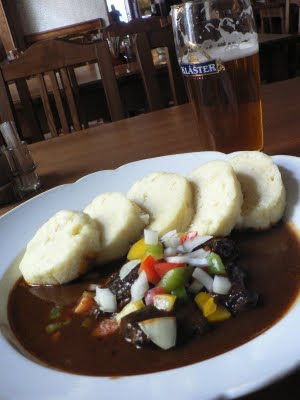 But the top honours and accolades are taken by Hermelinový úsměv, perhaps the best "hermoš" I've ever had. Even the presentation of this classic beer snack is something completely different to anything I'd ever seen before. It is served in a small jar, pickled in oil onions and peppers, the cheese is filled with a mix of garlic, nuts and peppers and had been marinated to perfection. A true delicacy that all by itself makes a visit to U Vodoucha very well worth it. 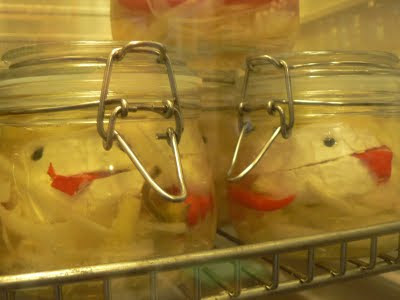 And really, whether you are in the neighbourhood or not (it's easy to get there, Metro A to Flora or tram 11 Radhošťská), dropping by at U Vodoucha is strongly recommended, maybe even for a family lunch. I'm sure you'll feel really well there. 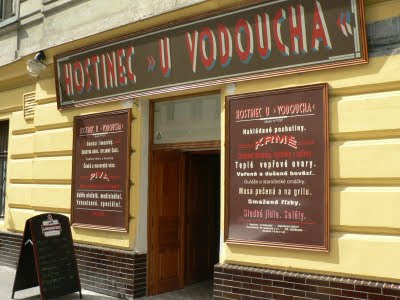