By Pivní Filosof October 21, 2010
I like discussing styles. It's a very rich topic and it usually generates heated debate. Pete Brown the other day started the latest discussion when he published the first and, a day later, the last of the two posts he said he will ever write on the subject. He was followed by other bloggers like Mark Dredge, Velký Al, Stan Hieronymus and a few more that I haven't read yet. All, together with some of the people who commented in their posts, present more than interesting arguments.

As for me. Well, I consider myself a style anarchist, but at the same time, I think knowing your styles well is important for two kinds of people:
As for us, the consumers. Each person can have their own point of view. Personally, I care very, very little about styles. My purchases are based on more concrete factors like colour and ABV %. Of course, if indicated, the style on the label will help me know that Beer A, a Barley Wine, will be different than Beer B, a Doppelbock, even though both are strong dark beers. But that is based on personal experience, in the same way that I will know that a Cabernet Sauvignon won't be the same as a Pinot Noir.

And since I've mentioned wines...

In his second post, Pete Brown mentions "wine styles" with the purpose of illustrating his point about beer styles. This is something I've seen many times, drawing a parallel between types of wine and beer in order to prove in a straightforward way that our favourite drink also offers a wide range of possibilities.

And yet, the more I think about this comparison, the more flawed I find it. The main problem is that a varietal is not the same as a "style". Let me explain:

Let's say I have a few vines of Malbec in my backyard and that last year I made wine with their grapes. What I have now in my cellar is a Malbec 2009. Quite likely a very shitty Malbec 2009, but nobody, absolutely nobody can argue that this is not a wine made from Malbec grapes picked in 2009. And if I had also made wine from those grapes this year, I would be about to have a Malbec 2010, and so on until I get tired of it.

Now, imagine I have a few sacks of malt (say Pilsen, Munich and Chocolate) a bag with Saaz or Hellertau hops and a flask with a certain kind of lager yeast. Can anyone tell me what sort of beer I will have as a result? No, I still don't know it myself; and I won't until I have put together or chosen a recipe. And even then, I could say that my beer is a Dunkles and someone else, after an analysis, will say it's a Märzen, just like it happened to Gerardo Fiorotto with his wonderful Don Toto Barley Wine, which for a judge was actually an Old Ale.

Wine has it a lot easier, really. Anyone can understand that a Tempranillo 2007 will be different than a Shiraz 2009, they won't even need to drink them. Now, what is the difference between a Pale Ale and an India Pale Ale?

If we want to draw a good parallel between beer and wine (something quite difficult to begin with), then we should not do it by saying that something like Chardonnay is a style. If we keep on doing this we might fall in the same trap as this dude: 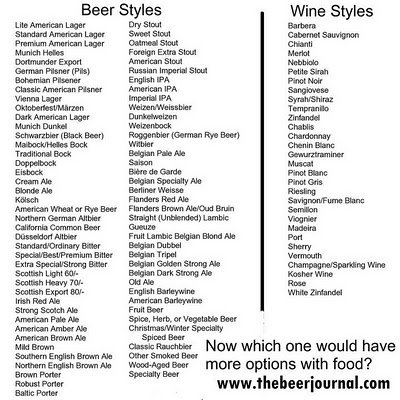 I'm one of those that believes that beer offers a wider range of possibilities to match with food than wine. But at the same time, I find the discussion about whether one is better than the other rather tiring and with very little sense, and the table you can see above is perhaps the worst argument in favour of any one of both drinks.