By Pivní Filosof August 23, 2010
Breaking a little with the habit, my friend Ramón decided that this time he and his wife would visit Prague in summer. Keeping with the habit, we arranged to meet for lunch. Breaking a bit with the habit, this time I didn't go alone, but with my family, wife, daughter and my parents, who were on a visit. We met at Klašterní Šenk, perhaps my favourite restaurant in Prague. We had some really fantastic food (those ribs, man, they were awesome!) and a great time in all.

Keeping with the habit, during lunch Ramón gave me the beers I had "ordered". When before coming he asked what I was interested in from his native Catalunya, I thought I would play safe, and ordered something from Agullons and Guineu. These two micros have great reputations and I had already tasted samples from both. With these new samples I wanted to prove if the Montserrat from Guineu had not been a one-off, and if I had been right in giving Agullon's Runa Brown Ale the benefit of the doubt by considering that the beer had not traveled well from Spain.

What I got from Guineu was Coaner. I must confess that when I read the word "lager" on the back label, my expectations went down a couple of steps, and there they stayed even after reading that ingredients include smoked malts. Partly that was prejudice (I can't avoid it, it always happens to me with lagers brewed out of CZ and Germany) and partly, it was because of the bad memories left by Glops. 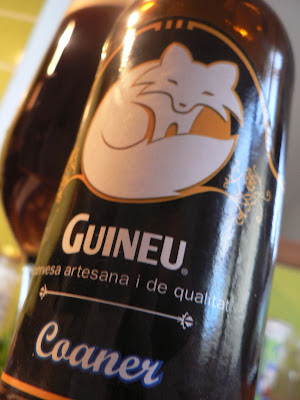 Neither my prejudice, nor the bad memories turned out to be right. Coaner pours a brown shade of amber, without too much of a head. The nose doesn't promise much, really, brown sugar, coffee and fruit, but each of them is doing their own thing and they don't seem to be interested in working together. Fortunately, the palate does not have to suffer the same ordeal, here everything is very well balanced and integrated, the raisins, the cocoa and the flowers, all getting gradually drier towards the finish. With 4.6%ABV, if it was at least slightly filtered or well tapped, it could be really lovely session brew. I liked it a lot.

From Agullons, what I got was Pura Pale. While Coaner's label shares a lot of information, it even recommends serving temperature, Pura Pale only tells us it's ABV (5%). Now, I do agree with those who say most people couldn't give less of a toss about what's in their beer, but still, this is the kind of information I value when looking for a new beer to buy. 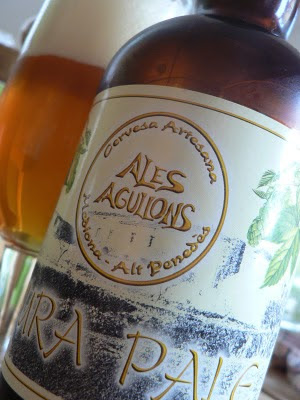 Anyway, since I already had the bottle in my possession, the only way I could find out what the beer was about was opening it. It looks just the same as a good Světlý Ležák. The nose is subtle, with touches of tropical fruit, herbs and flowers. It goes in with a very good balance and medium body with notes of fruit, mild syrup that support drier flavours, which swing between the herbs and citrus. All this could be a lot more pleasant if the carbonation wasn't so high. But I still liked it a lot, what made me like it even more is that it comes in a proper measure for a beer of this kind, 0.5l. I know Spaniards like their cold ones in small glasses, but it would still be nice to see more micros bottling some of their product in this size, to me, the most appropriate for ligth or medium strength beers.

So, I ended up very satisfied with this selection. Lately, a lot of new micros have opened in Catalunya and the quality of many, if not most, seems to leave a lot to be desired. I wish more would follow the example set by the likes of Guineu and Agullons because, as I see it, this is the path that should be taken.