By Pivní Filosof May 20, 2010
Smoked beers are an acquired taste. I think I could divide most people I know into two groups, those that love them and those that hate them, with few in between.

But it seems that they are slowly becoming more popular among Czech consumers. The bottles of some rauch imported from Bamberg are a common feature in a few spots in Prague, and sometimes they even show up on tap. Also, in the last couple of years, several local micros have had a go at different kinds of smoked beers, usually with good results.

It's no surprise then that one of the regionals noticed this trend and wanted to tap it. And so it is that we can announce the first industrially brewed smoked beer of the Czech Republic, and no, it doesn't come from the brewery I'm sure many of you are thinking. It comes from Český Krumlov, and it's brewed by Pivovar Eggenberg (I think I heard sometime ago that they were about to close).

I've never been a fan of the beers from Eggenberg. Only their tmavý ležák I could say that I liked. But still, when I read the news in Svět Piva I contacted the brewery to ask them if their new product was available in Prague, and if not, if there was a chance I could get a sample (not expecting an answer to that last question).

I was greatly surprised when a few days later I got an email from the local representative of the brewery saying that he had some samples for me. What I got was five 0.33l bottles of Švihák and some other samples from the rest of their portfolio. See what you can get if you ask for things nicely?

Since I had so many bottles of the same beer, I decided I would taste it at different temperatures: after a whole day in the fridge, as many people like to drink their beer at home; after an hour or so in the fridge, as I like to drink dark lagers and at "room temperature", just for the sake of it. I got the best results with the second experiment and that is where my notes come from. 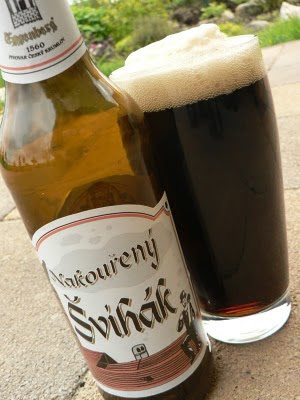 Nakouření Švihák (the translation would be Smoked Dude, in the dandy sense not the duuuuuuddde! one) pours a very dark amber, clean and topped by a nice, long lasting spongy head. An elegant beer, just like a dandy. Unlike the promises on the back label, there's not much that reaches the nose, just some sweet coffee and a hint of smoked bacon, and that, probably only because I knew what I was looking for. Fortunately, it does pack more taste. Strong coffee, mildly sweetened, black sugar. Mild smoked notes show up in the middle and don't linger for too long. The black sugar turns into licorice in the finish leaving a nice aftertaste that is a mix of bitter, dry and roast. Not bad, better than I expected, considering who made it.

However, as a fan of smoked beers, I would have liked it to have more bacon. But I must be realistic, I can't expect something like Schlenkerla Märzen from a Czech industrial brewer. Pivovar Eggenberg's goal isn't to please a growing, yet still too small, niche, but to offer the average consumer something new without being too radical.

Anyway, personal prefernces aside, I think all good beer lovers in the Czech Rep. should celebrate Nakouření Švihák and wish the beer success. Not only for the sake of the brewery, but because if it does become successful there will sure be others that will brew something similar, just like it's happened with wheat beers. Unlike those, however, smoked beers would not need any investments in technologies or adapting processes since they are still lagers, but with a slightly different recipe.

So, who's next in the smoke house? Bernard? Standa, if you are reading this, talk to your head brewer and start working on a rauch version of your černý speciál, right now, I can't imagine a beer that would make me happier.