By Pivní Filosof October 16, 2008
Steak Restaurant Hradčanská is potentially well located, just opposite the metro station and tram stops of the same name. However, there isn't much foot traffic on that side of the street, and people that can see it while waiting for their trams can't cross, but have to go all the way to the underground pass, which must discourage most.

Those few that bother will find a small place with just a handful of tables and very little atmosphere. Actually, it looks more like a bar by a train or bus station than a restaurant, meaning that it does not make you stay, but just get something quick to kill a little time. All this is enhanced by the soundtrack. A Mcradio, one of those that, except for a few concessions to local interpreters, plays the same prefabricated music the world over. Ok, the music thing is a matter of tastes, but what really irritates me is the agressive advertising and the silly blond voice of the host that seem to attack you every five minutes or so. 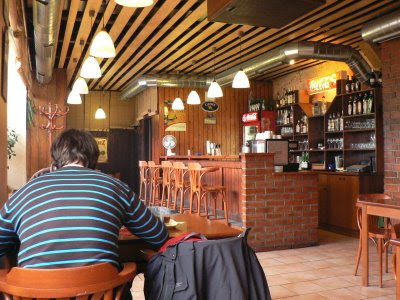 I got there a bit after midday and only one table was taken. It might have been because of the dodgy location or the fact that they don't do lunch menus. In the face of this, I wasn't expecting much. It was still a place I had wanted to visit. The reason will be obvious for most of you, the beer they stock, Lobkowicz, from Pivovar Vysoký Chlumec, very rarely seen in Prague.

I took a table in the back and the waiter was there in a second. Of course, some of you might say, the place was empty, but you'd be surprised to know how usual it is that the emptier the place, the longer you must wait for the service. I ordered a beer and opened the menu. When the waiter came back with my pivo I hadn't chosen yet. In many places that would elicit the question "Máte vybráno" (have you chosen?) with an impatient tone. If the answer is "not yet", the patron will probably have to wait a long time before being able to speak to the service again. Not here, though. Without asking anything, the waiter retired to the bar only to come back as soon as I had put the menu down (a sign here that you are ready to order) a minute or so later. I also liked the small detail of the complimentary glass of plum wine.

I ordered a trukey breast steak (125CZK). What took me so much time to decide was the sauce. There are many to choose from, separated in two groups. The first are sauces, or atually toppings, made with ingredients such as fruit, cheese, vegetables, etc (my attention was caught by one with honey and almonds), they cost 35CZK extra, and the other with actual sauces that cost 25CZK. I went for one of the latter, a curry sauce.

While I waited I tasted the Lobkobicz Vévoda that I had in front of me. This 11° of a classic golden colour and very low carbonation is a more than adecuate session beer. Mostly fruity both in the nose and taste, ending in a short herbal bitter finish, won't amaze, but is very drinkable. 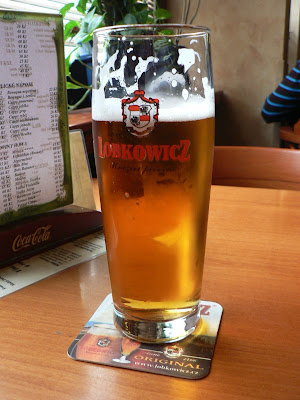 The food really surprised me. The turkey was cooked to perfection, it was tender, not at all dry and very well seasoned. The curry sauce was mild, but very tasty and seemed home made and not something out of a packet. The chips I had orderd on the side weren't home made, but they were still pretty good. I really liked it a lot. 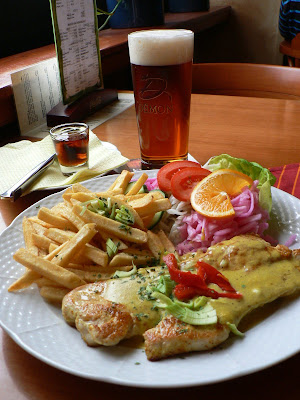 With the food I drank a Lobokowicz Démon. A polotmavé speciál with a concept similar to Primátor Polotmavé 13% and Bernard Jantár. And it wants to be like those two, but with the volume turned way down and the equalizer disabled. In fact, it was completelly overwhelmed by the steak and the sauce. I remembered that the Bernard Jantár, a lighter beer, had absolutely no problem with pairing with that pork in beer and marmalade sauce, of richer taste than what I was eating today.

It could be said that the beers from Lobkowicz are a good analogy for Steak Restaurant Hradčanská. They aren't bad, but they are missing something, more spirit perhaps. The restaurant has good service, good food (I want to go back and try that honey and almonds sauce) at decent prices, but no atmosphere. As with the beer, it is forgettable, you wouldn't recommend it, but wouldn't give bad references of it if someone asks. 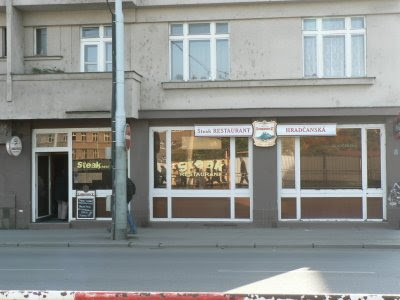