By Pivní Filosof October 11, 2008
Consumption of non alcoholic beers in the Czech Republic has increased dramatically in the last couple of years. I don't have any figures (as an investigative journalist, I'm quite lazy), but you can believe me.

There are various reasons for this. New traffic laws, although drinking and driving has been illegal here for many years controls nowadays are more strict and fines (or bribes) a lot more expensive. A slow, yet constant, change in lifestyle, there are more and more people, specially among the young, that are watching their diets and have lowered their intake of alcohol. A change in the corporate culture of many companies, together with the relocation of their offices to metal and glass boxes in the outskirts of town; having a beer or two with lunch is not an option anymore for many, be it because their employer forbids it or because the canteen of their (at least) eight hours a day prison does not sell booze.

All this, of course, has not escapted the attention of breweries. There is more demand and potential market, thus the offer has increased; many are the breweries that have come out with their nealko. This has also generated competition. Today, nealko are not such a marginal member of the product line anymore, they are being promoted more agressively.

I think that a big part of this phenomenon is due to a considerable increase in quality, partly generated by the competition. Many are those who before would drink soft drinks, juices or mineral water and now choose a nealko.

I remember my first experience with a non alcoholic beer in Prague. I was with a friend at the old Slavia winter stadium watching a hockey game when we started to feel a bit hungry. We went to the concession stand and ordered a sausage and a beer. The beer smelled a bit funny to me, and tasted even worse. I asked my mate if he noticed something werid with his as well and he told me that we might have been given nealko. Which was confirmed by the sign on the stand's window.

It took me quite some time until I was able to bring myself to taste another non alcoholic beer. It was, if I'm not wrong, until one of the tastings at Pivovarský Klub that I did it. I was then surprised to find a more than drinkable product, completely different to that one that ended up in a dustbin at the hockey game. Other breweries presented their nealko at their respective tastings, some I liked better than others, but none disgusted me. So it was that I decided to explore a bit and taste a few.

I started with Budvar Nealko, which has been on the market for a long time. You can appreciate there many of the typical characteristics of these kind of beers, more carbonation, lighter in colour, a nose where raw cereal predominates and very light body. Its taste, however, is surprisingly bitter and refreshing. Very drinkable. 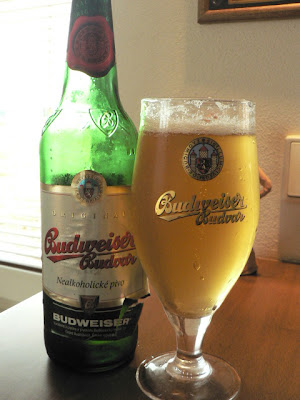 Then I tasted the nealko from the other brewery from České Budějovice, Budweiser Burgerbäu Pito. This one is more old school, and by that I mean awful. Tremendously chemical flavour that leaves a very unpleasant aftertaste, I was not able to finish the glass. 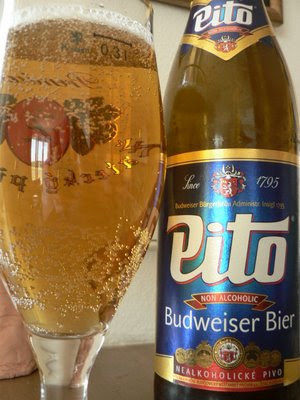 It was the turn of Bernard Free, which I boldly included in the tasting of La Ronda #3. Its colour is almost like a desítka's, it has a lasting head. The nose is also cereal, but now joined by some cannabis and flower notes. Cannabis can also be felt on the taste and the finish is even more bitter than Budvar's. I liked it a lot. I would dare say that this nealko could very well cheat a not knowledgable palate. Bernard also brews a Jantár version of its Free, a non alcoholic amber that is, of course, more caramelly than the pale. I didn't like it as much, but it is still drinkable and completely different to the rest. Both are sold unpasteurised. 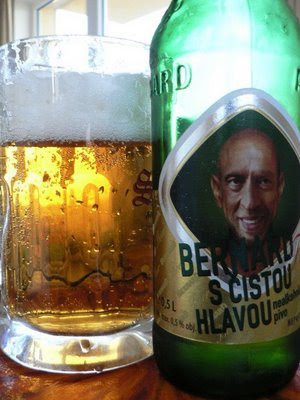 Last, but not least, was Radegast Birrel, brewed by the biggest domestic brewery it is, thus, the most popular and easiest to find. It was the first to be sold on tap, and that is the version I tasted this time. I don't like it bottled or canned, but tapped is a lot more drinkable. Less carbnation, silkier mouthfeel and not so artificial taste.

The future looks good for nealko piva. There are more and more breweries that offer theirs on tap and there is at least one craft take on it. I tasted it at the Slunce ve Skle festival in Pilsen and was very impressed, very dark and flavoured with coffee, a tasty and interesting drink.

Although I must say I liked some (specially Bernard Free, which I would gladly drink before Stella Artois and the likes) none could replace the real thing. As a friend of mine says, non alcoholic beers are something people drink because they have to, not because they want. It is really good to know that those who can't drink a beer have options that are tastier, healthier and even more refreshing than sodas, mineral water or pre packed juices.

In the meantime, I will get myself a bottle of Svijany.