By Pivní Filosof August 14, 2008
Skanzen is too close to my favourite Pivovarský Klub, which many times makes me forget about it.

It is a strange place. Pretty much opposite Florenc metro station and located in a very deep cellar (I never pay attention to my mobile while I'm dining, but I wouldn't be surprised if it didn't pick a signal down there). After going down a couple of floors by a stairway decorated with crude Czech comics, you will be facing a wall. On it there are signs pointing to the bar (right) and to the "sál" (left). 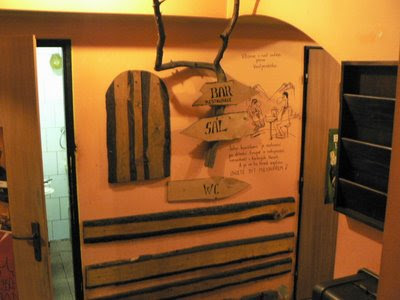 The former is divided in a couple of areas by the bar. The furnishing looks cheap and not too comfortable, more appropriate for a garden than a cellar, the walls are also decorated with Czech comics as well as with interesting drawings and pictures (plus the almost mandatory array of junk and old bottles). The latter is is a pretty big room with tables and benches like those used at beer gardens, and dominated by a big screen where sports events and music videos are projected. A nice place to sit down and have many beers with friends.

In summer they put some tables in the courtyard at street level. There you can see something that sometimes makes me feel a bit strange. A metal plaque marking the level the water reached on August 14, 2002 (over 2m). That was the peak day of the worst flood in Prague's history. All the area of Florenc and Karlín (among others) was pretty much devastated by the waters of the Vltava, which is about 500m from the place. Since then, nothing similar has happened, and the only thing that has risen are modern office buildings. However, memorials like this can make me doubt the wisdom of it all. For the time being, though, it is dry and comfortable and in a act of wisdom rare in Prague there is a waiter assigned exclusively for the patio armed with a portable beer tapping system and kegs so he doesn't have to go up and down every time someone wants a pint. 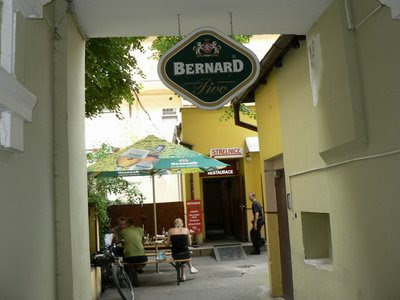 The food at Skanzen is serviceable. Nothing out of this world and without pretensions, but very edible. Now and again, the kitchen gets inspired and can come out with really good stuff. The prices are more than moderate. During lunch, this pub is fairly popular with the slaves of the nearby offices, and later with noisy people that want to have a good time and drink good beer.

And the beer is very good. Three from the Bernard family, plus the kvasnicové guest starring occasionally. The surprisingly malty and hoppy 10° (22Kc/0.5l), a great session beer by all means, and incredibly refreshing; the 12° (27Kc/0.5l), every bit as good as Pilsner Urquell tanková, without any of the fuss; and černé 13° (28Kc), with all its flavour full of roasted and caramel notes, great to wash down grilled or roasted meats. 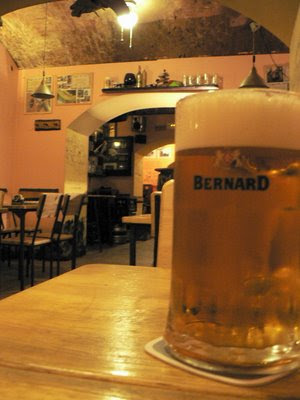 Skanzen is not a place for a romantic meal, nor to sit down for a quiet conversation. It is a place to go and have a few pints without paying too much attention to the environment. Good for groups. 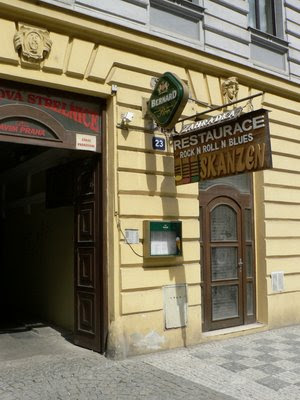