By Pivní Filosof May 13, 2008
So let's see. It's not far from Prague (about an hour and a half by car), yet far from the umbrella following herds. It's located in a beautiful place, a promontory overlooking the confluence of the Vltava and Otava rivers, surrounded by thick forests and with spectacular views of the cliffs by the rivers. It's ideal for a day trip with children or partner, the place is pretty quiet and romantic. If we add to all this the brewpub located at about 500m from the entrance of Zvíkov Castle, we can say we have an almost perfect trip.

Zvikovksý Hrad is full of history and legend. It's almost a fairy tale castle. There is a tall tower next to the gates, gardens, a fairly well preserved main structure and the rest in elegant ruins. 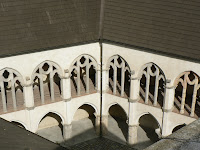 The castle was established in the 13th century by none other than Otakar II and, until Karlštejn was finished, it served as royal castle and depository of the crown jewels. After that, the it went through many hands until it started to fall into disrepair, so much so that part of the main building fell to the river. During the 19th century, after being "rediscovered", it was partially restored. 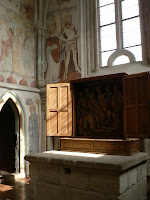 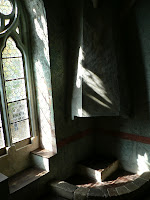 For those used to the splendor and opulence of some of the more famous Czech castles and palaces, the interiors of Zvíkov might seem a bit empty and spartan. The furnishing is scarce and, except for some frescoes and the impressive wood carved chapel, there are few works of art that can be seen. All this, though, give the castle a lot of atmosphere. Almost as much as the legends around it, like the one that claims that the crown jewels are still there, buried somewhere. Or what about those mysterious carvings on one of the walls of the black tower, the oldest part of the complex?

Last time I went it was one of those gloriously sunny autumn days. The gardens were carpeted with fallen leaves and invited you to sit down and relax, but also to roam around and look over the battlements to admire the magnificent view.

One of the best things about Zvíkov is that, unlike at every other castle and palace I've visited so far, there is no need to follow a guide. After paying an entrance fee of 50CZK you are given a laminated piece of paper with the history of the castle, and just walk around the rooms as you please while reading the information plaques found in each of them. Also, you can make as many photos as you like of anything you fancy. Brilliant.

And there is also Pivovarký Dvůr Zvíkovský Podhrady. Actually a complex that includes a brewery, restaurant, hotel and bakery. 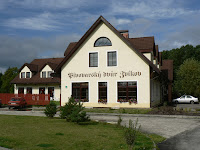 The restaurant is pretty nice, with very hight ceilings and big windows that make it very luminous. It is dominated, as usually in brewpubs, by two copper kettles; but also by a massive grill above wich there is an equally massive chimney. 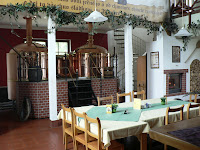 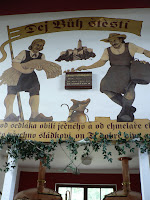 The prices of food and beer are a bit higher than at other brewpubs and breweries I've visited out of Prague. The price of a pint last time I went was 31.50CZK, which would be fine in Prague, yet here, in the middle of nowhere CZ it's a bit high. To give you an idea, at the restaurant of the Svijany brewery a pint will go for 17CZK, same price you will pay at Berounský Medvěd. Same can be said about the food. Though, to be fair, the place is a little more stylish than the above mentioned.

Money matters aside, Zvíkovské Pivo is VERY good. They usually offer three, Zlatá labuť 11%, an unfiltered golden lager with sweet green apple and herbal notes and a lovely bitter finish. Zlatá labuť 13% tmavé, which is one of my favourite Czech black beers. It's nose is full of coffee with sugar and the coffee is what dominates the palate followed by a finish full of caramel and herbal notes. Simply gorgeous. And Rarášek, a top fermented, maybe wheat beer, with mild banana, cinnammon and vanilla all supported by subtle ginger (which is said to be part of the recipe). A fantastic summer drink. 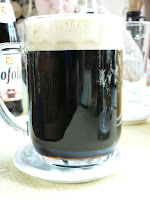 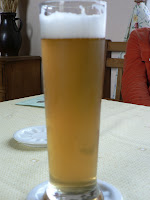 You can also buy bottles to take home. They are all very nice, but the price is outrageously high (100CZK for one) considering that they contain the same beers they have on tap. Except for the 26° Královská Zlatá labuť, a very strong lager brewed for almost a year and that comes in an elegant half litre bottle, together with small cordial like glasses, all packed in a good looking wooden case for the price of 1000CZK. I had a bit of it on tap once, and was not very impressed, but maybe is the kind of beer that expresses itself better after some time in a bottle. 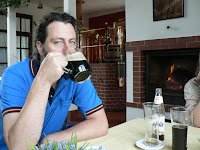 Anyway, I really recommend you to go there and see it for yourself. The castle alone is well worth the trip. If we add to that the lovely beers, it's a nobrainer.