By Pivní Filosof May 26, 2008
As expected, I went to Český Pivní Festival Praha 2008, shortly after the doors were opened on the first day.

I didn't have too much time, but I still wanted to go. I really wanted to see what I was all about. Friday was not the nicest of days. I arrived a bit after 1PM and the few people that were already there seemed mostly VIP's invited for the opening ceremony. Which was actually a bit of luck because as I was getting to the place where the first "barrel" was tapped, one of the waitresses put a pint in my hand. She saw me with my camera already around my neck, and must have thought that I was a journalist. Which, actually, isn't that far from the truth...hehe!
Sipping that free pint of Budvar, I was able to witness how Prague's mayor, Pavel Bem had a toast with some minor celebrity from the local TV, only to leave as soon as the photographers got busy with something more interesting, like drinking beer. Either he still had some work in the office, or he didn't want his suit to get wet with the rain that never came.

Once all the excitement was over, I went to where I had intended in the first place, the K Brewing tent, the one of the small breweries, six in total (Černá Hora, Janaček, Jihlava, Platan, Rohozec, Svijany). There I found some friends and what was going to be a quick pint before walking around a bit more, turned into a pleasant conversation that was later joined by other friends.

I had a couple more pints than I had planned, and stayed a bit longer than I had also planned. But I can't complain, I had a pretty fine time.

Although I wasn't able to see the facilities in more detail, my impression isn't all that bad. Let me begin with the low points. The price of the food, very high. 160CZK for guláš with plastic looking kndelíky is a bit a too much. I don't know about the quality, I didn't have any food there. You could only order it at one tent, that of Kozel, and I didn't fancy leaving the chat to go all the way there. The alternative was to order an, also expensive, portion of roasted beef, but a couple of my friends didn't recommend it.

39CZK for a pint is not cheap either. But on the other hand, it is a flat price, be it for the ubiquitous Gambrinus 10°, or for rarities such as Jihlavský Grand 18°, or any of the other 28 available at the different tents.

The entrance could also be cheaper, or better still, free. I think that would make more people go and would give the event an even more beergarden-like atmosphere.

The good thing, the service. I didn't experience it first hand, but I could notice eager waiters and waitresses even with a few smiles doing their job at the VIP tent. And I could experience it at the K Brewing tent. Until we were able to buy some tolars to pay for our beers, they let us keep a tab. All of the waiters were friendly and never minded when each of us ordered a different beer of the twelve they were tapping.

And I must say that the organisers surprised me with tolars. I was afraid that it would be possible to buy them only at a couple of stands, but actually, they could be bought from the girls that walked around among the tents selling them. Very good idea.

The best, the beer of course. Being able to, in one session, drink Platan 11°, Černá Hora Kvasar, Rohozec 11°, Janaček Comenius 14°, Sivjany Kvasničak and Jihlavský Grand 18°; all while having a good time with friends, is priceless.

I want to go there again this Friday, arrive a bit later and stay longer. There wasn't too much of an atmosphere yet the other day, but it could already be felt that with a bit more people, things could improve greatly.

Has anyone been there yet? If so, let me know what you think. Meanwhile, I'll leave you with some photos. 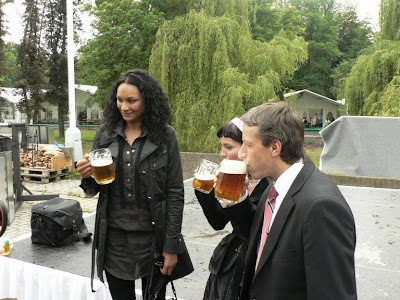 The Mayor and his lady friends 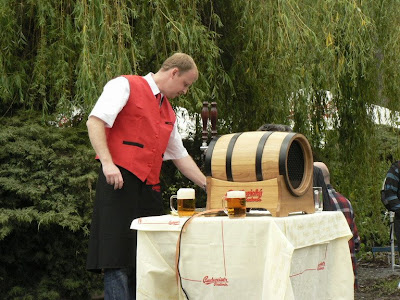 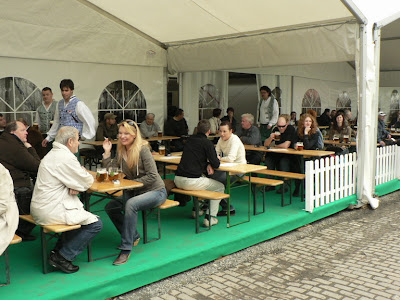 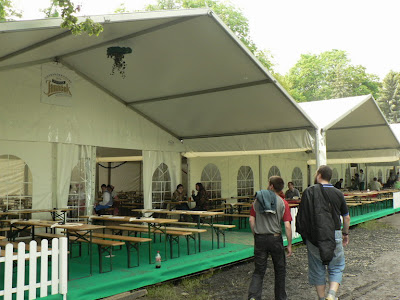 Not so much at K Brewing's. In fact, most people there
seemed to be real beer lovers. 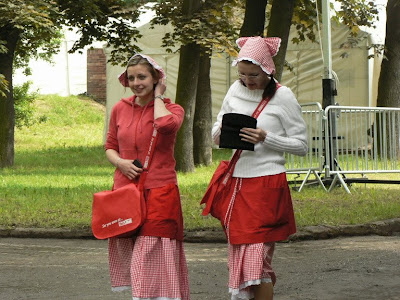 Two of the Tolar dealers 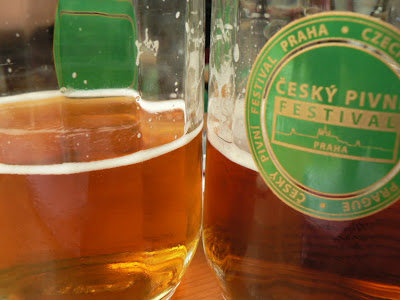 The best of the afternoon
Update: According to Evan Rail's report, it seems that the most popular tent at the festival is the Small Breweries, read the post, it's full of great news.
I think the relatively high price for the beer played in the small breweries’ favour. Everybody knows the stuff from the big boys and I don’t think there are too many people out there willing to pay 39CZK for Gambáč, Staropramen or Braník when you can get them cheaper at pretty much every corner.
The smaller breweries, however, have the advantage of being, to many, unkown, which I’m sure makes many people more willing to pay that price. All beers will cost the same, so why not having something they never had before? To this, of course, we must add the variety factor.