It's an early Friday evening in mid-August and, in spite of the iffy weather, I'm sitting in the courtyard of Únětický Pivovar, waiting in the company of a Desítka for the owners, Lucie and Štěpán Tkadlec.

They arrive a few minutes later, riding their scooters, just when my půl litr is dangerously close to being empty. I'm here to interview them on the occasion of the fifth anniversary of the brewery's resurrection (which was celebrated in May). 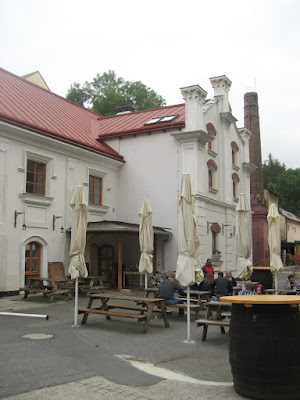 My hopes to have a serious Q&A session with them start looking more uncertain than the weather when Lucka insist we drink something stiffer than beer. But I don't know what I was expecting; I'm sharing a table with friends who happen to run a brewery, and who also like having a tipple every bit as much as I do, if not more.

After the three beers and the three glasses of Single Malt Scotch arrive, and after the “Na Zdraví!”, I somehow manage to get the interview started with some background questions.

They both began working at Pivovary Staropramen in 1998, but in different parts of the company. Lucie was in the financial section, doing internal audits. Štěpán was in the labs, and later would be in charge of the bottling line and then of technology investments. They wouldn't meet until Lucka was tasked with the implementation of SAP.

Lucie would leave the company after their first daughter was born, Štěpán, a couple of years later; he needed a change. He would set up an event management company, but still felt they needed to “do something”.

By then, they were living in neighbouring Roztoky and would frequent the wine cellar that still operates within the old brewery complex. It was during one their wine runs that they got the idea to restore that building to its original purpose.

They were lucky. Firstly, because the building was in a pretty good shape—at the time it was used to store dairy products. Secondly, because the owner wanted to part ways with the company that operated the storage facilities. In 2010, contracts were signed and hands were shaken. The total investment to get the brewery up and running would be 40 million CZK (about 1.6 million EUR then). Unlike not few new breweries, the financing didn't come from a crowdfunding campaign or government or EU grants. Part came from bank loans, the rest, from two investors—friends of theirs, who remain part owners.

The drizzle has become a nuisance with no intention of going anywhere. We grab the glasses and move inside the brewery's pub, which has been set-up in the old floor maltings, built in 1711, the oldest part of the complex.

When we sit at their favourite table, Štěpán and Lucka excuse themselves, they must sort something out with the manager of the pub—the Chef is leaving and they need to talk about who will be replacing him. The pub, by the way, is also run by the Tkadlec. As Lucie explains, they have it under a subsidiary company to get a clearer view of the accounting. It barely breaks even, she adds; it does fantastically well at weekends, especially in Spring and Summer, but not many people come during the week—something I can attest. They wouldn't think of closing it, though. For them, it is an important part of the brewery, and not only as a showroom for their beers. Every year, they sell 1,000 hl at the taproom, half of which in PET bottles, but places like Vzorkovna, the bar at the National Technical Libray, Pražán (in Výstaviště Praha Holešovice) and Kavárna Liberál sell even more.

From the very beginning, Štěpán and Lucka wanted the brewery to be more than just a company that made and sold beer. Their intention was to make it integral part of the community, the village of Únětice, They found a fan in the mayor, Vladimír Vytiska, who gave them his full support once he was acquainted with all four owners and what they had in mind.

Almost as if he had been waiting for his cue—he's a musician and member of the troupe of Divádlo Sklep—Mr Vytiska, joins our table for a couple of beers. Pint in hand, he tells me he loved the idea of restoring the brewery; in fact, it's something he had thought about already in the 1990s, but it didn't go anywhere. The brewery building was one of the assets the state put up for sale in the Big Privatisation that followed the fall the Communist regime, and towns were not allowed to bid for them; though he also admits that perhaps it was not the right time to set up a brewery like this.

The role Únětický Pivovar plays in the community can be clearly seen at Posvicení, the local parish fair that will be taking place tomorrow in the brewery's courtyard and repurposed stable, which I will attend, as I do every year; and not only because of the Rye Lager they brew specially for the occasion, but for the atmosphere (and also to see the mayor play the ukulele).

One of the things that really surprised me was how quickly they had the brewery going. They had taken over the building in November 2010, and the following May they already brewing the beer that would be tapped at the official opening in June.

It was almost a matter of life or death, they explain. Knowing they didn't have any further source of financing, they had to catch the summer season from the beginning to at least be able to keep their heads above water that first year. It was hard, it was mad, they tell me, but when they saw the crowd gathering in the courtyard for opening day, they felt it might had been all worth it, after all. 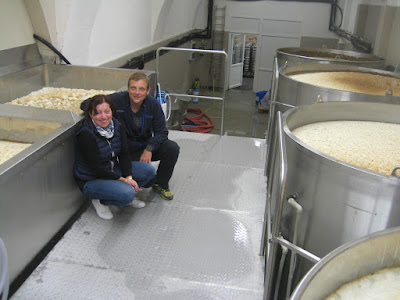 And they were right. That first year, they managed to brew about 2,500 hl, and it would take them only three years to reach the 10,000 hl/y that mark the legal limit for a brewery to be a minipivovar. A great part of it was thanks to hard sales work—going out and offering the product and the brewery—but there were times that the beer was able to put up a convincing argument all by itself. When I asked how they managed so relatively quickly to get their beers into old-school pubs like U Pětníka, they told me they had tried several times to speak to the owner—who also owns Na Urale and Na Slamníku—only to be stonewalled by the staff. They had pretty much given up hope until one day the man was cycling past the brewery, stopped for a quick one at the taproom and decided his pubs had to serve those beers.

Presently, Únětický Pivovar employs almost 30 people (including the pub's staff), most of them locals or from nearby villages. Last year they brewed about 12,000 hl and expect to make 12.5-13 thousand this year. Although Lucka drops a 20,000 hl figure for the not too distant future, they don't seem to see growth as an end itself, but rather, as a result. That being said, the brewhouse is already bursting at the seams, and sooner rather than later they will have to decide what to do with it: either add one or two more vessels, or replace it by a 50 hl one (the current is a 25 hl kit). One thing is certain, though, they have no intention of changing their approach to beer: 10° and 12° will be the only beers they will produce year-round, complemented by a few seasonal specials.

It wouldn't be possible to finish this interview without talking about Vladimír Černohorský, the brewery's first Brew Master, who passed away about a year ago. The first meeting of Lucie and Štěpán with this great (and much missed) personality of the Czech beer community was a classic: Černohorský, greeted them saying he admired people who would buy a brewery instead of a Lamborghini; and it got better from there. Ivan Chramosíl, who has recently retired after more than four decades at U Fleku, has joined the team, trying to fill the void left by Vladimír. He designed the recipe for the excellent Anniversary Desítka served last May. The day-to-day production, however, is in charge of Jan Lumbert, a really cool guy who's no rookie. Before coming to Únětice (where actually lives), he had worked 13 years as a brewer in Staropramen.

By the time we begin exchanging anecdotes about our late friend Černohorský, other people have joined the table and the interview has fully become just another session at a pub, with the conversation drifting here and there and friendships being reinforced and established, while Štěpán fills in the lagering cellar a copper Mazák with Posvícenský Speciál, the 11.5° Rye Lager that will be tapped tomorrow; and it goes on until past closing time. (Fortunately for me, one of the waitresses offers to give me a ride, otherwise, getting back home would've been a bit of a problem.) 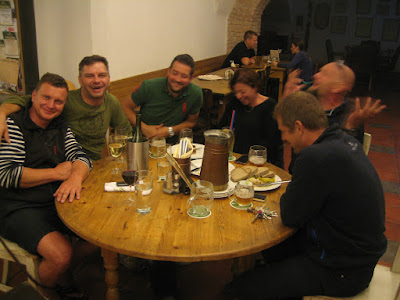 I won't pretend anything resembling objectivity. I have a special relationship with Únětický Pivovar, one that goes well beyond their beers. I know how hard Lucka and Štěpán have worked to get to where they are now, and I believe the same can be said about everyone working there. Their success is very well deserved.