On the Piss in Bavaria - Part 4

What? You're thinking of reading this post without first having read part 1, part 2, and part 3? What sort of mad person are ya?

When we got to Hofbräuhaus Kristof called a friend of his to check if he was in town. It was Diego, an Italian who sells Auer-Bier at his pub in Verona, and an all around great bloke.

Diego is one of those larger than life characters with a seemingly endless supply of unbelievable (say that with an Italian accent) anecdotes that could make a palace guard on duty laugh. Despite being a foreigner who comes to Munich only every other weekend or so, it took him only six months to be accepted among the Stammich at Hofbräuhaus, and he now has his own earthenware Maß that he keeps in the cage-like locker reserved for the most loyal regulars of the beer hall. 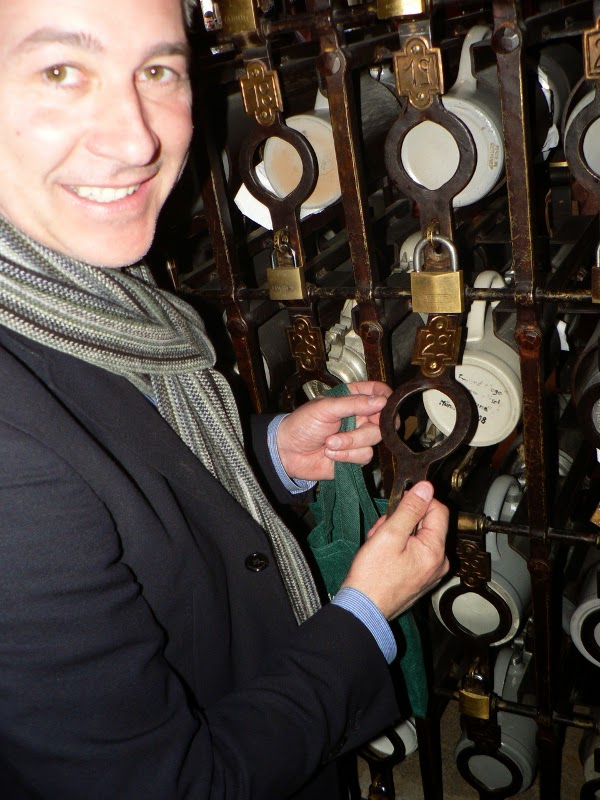 The prospect of waiting maybe half an hour to get another Maß of that bureaucrat of a beer wasn't too appealing, and it was decided we'd go somewhere else – Hofbräuhaus is, in general, one of those places that I'm glad I've been to, but I don't need to go there again.

Diego had taken over guide duties – he knows the city better than Kristof – and he promised he'd take us to a really cool spot.

We followed him into what can be described as a tiny square a few metres from the Neues Rathaus. The only thing that indicated we were near a pub was a group of people spilling out of a very regular looking doorway, some of whom were holding glasses of beer. 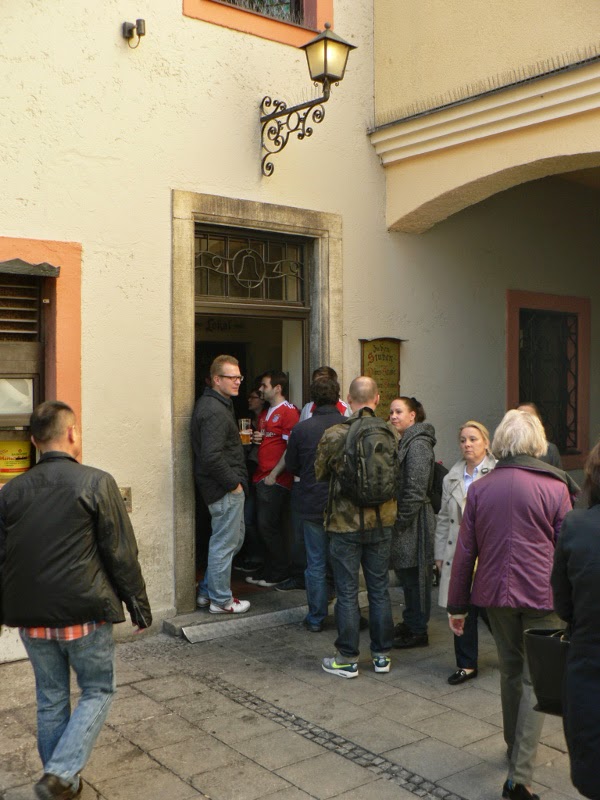 That doorway led to a crowded room that was not much bigger than a lift at a large, modern office building, with a stairway on the right and a window opposite the entrance. That window was the reason why everyone was there; it's where the beer comes from. The hole in the wall itself was part of Nürnberger Bratwurst Glöckl am Dom, a well known boozer in Munich, and beers in that minuscule taproom are, for some reason, 1€ cheaper than at the pub proper. Amazing. 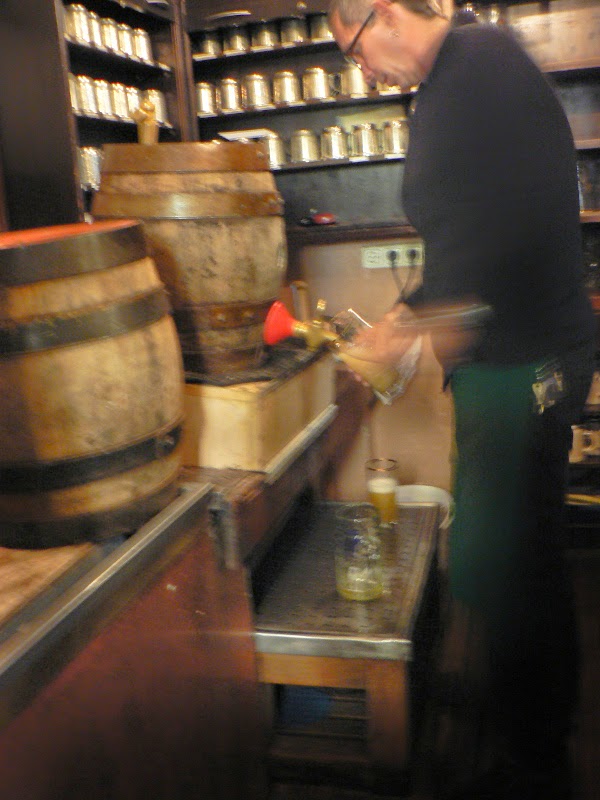 I loved it there! The atmosphere was amazing. Despite literally rubbing shoulders with everyone around you, there was not a single sour face to be seen. Everyone was enjoying their beers and the company. And the beer was fantastic, too; Augustiner Heller the Bayrischer Anstich way. What a beauty! Another proof that beer doesn't need to be made with a dozen types of malt, a fuckton of exotic hops and have high ABV% to be interesting and flavourful. 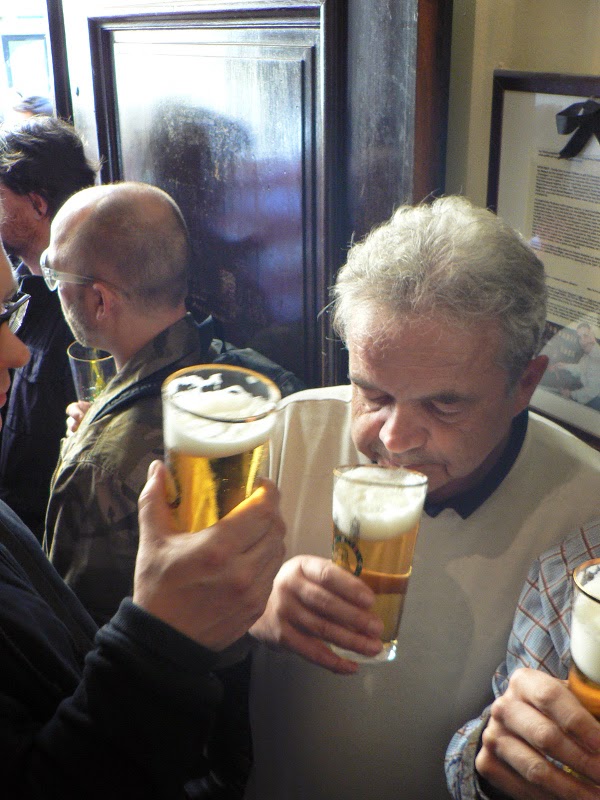 As much we all loved that taproom, the point of it is that you won't stay longer than a quick pint or two, and we played by those rules; after all, Munich isn't short of fine places to keep on drinking.

And we did go to a very fine place indeed, Andechser am Dom, which served very fine beer, too, Andechs Helles, also gravity dispensed. Delicious stuff.

What impressed me the most, though, was the way have the service outside sorted out. Instead of having the servers run back and forth to the bar of what must be a fairly large pub, this being Munich, they tap a 10-15l keg on table outside. So simple and so brilliant. No need for a cumbersome, top pressure dispensing system that will need cleaning, flushing and maintenance, and can start acting up at the worst possible time; the staff have their job a bit easier, while at the same time the service is quicker, and the clients get better beer. 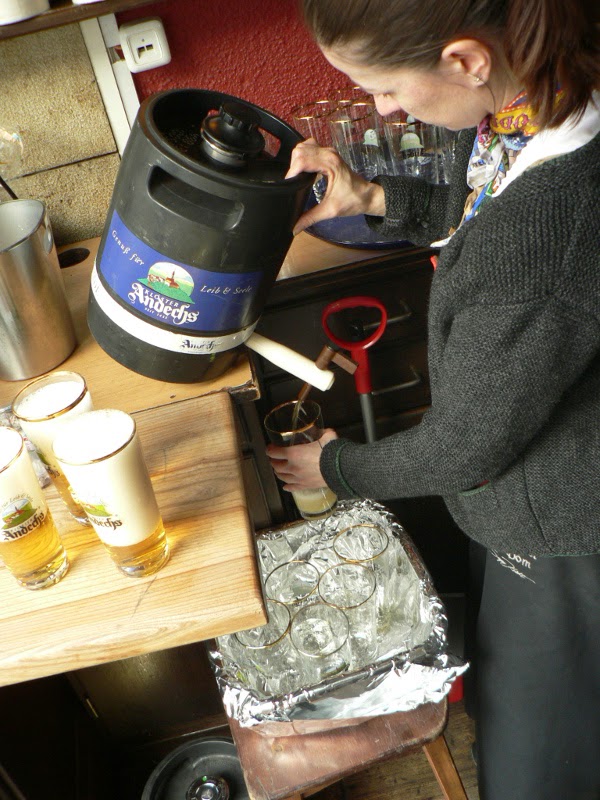 When we arrived there we were joined by two mates of Diego: an Italian whose name I've forgotten and local bloke in full Bavarian regalia. We stayed there in the gallery, having a few pints, enjoying the best part of true beer culture: talking, laughing, the where and when. 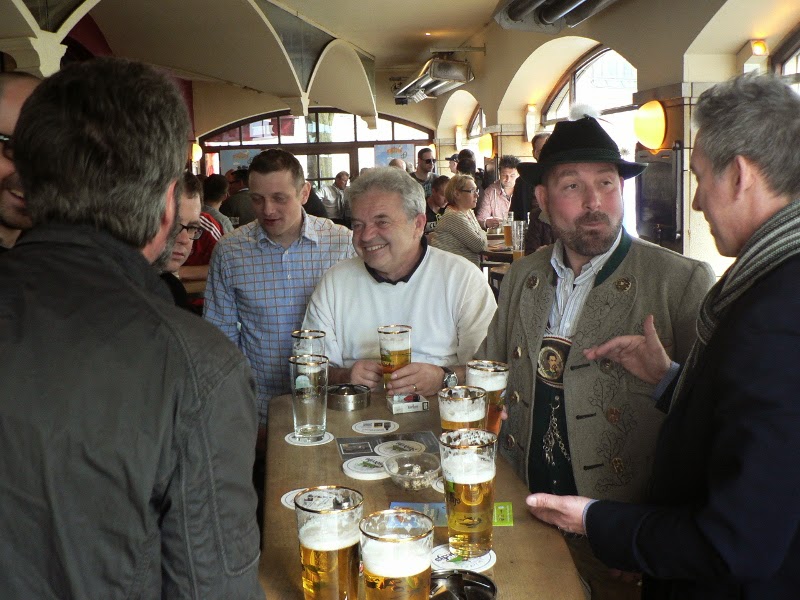 But we were not done with Munich, or rather, Munich wasn't done with yet. Diego had a surprise up his sleeve. 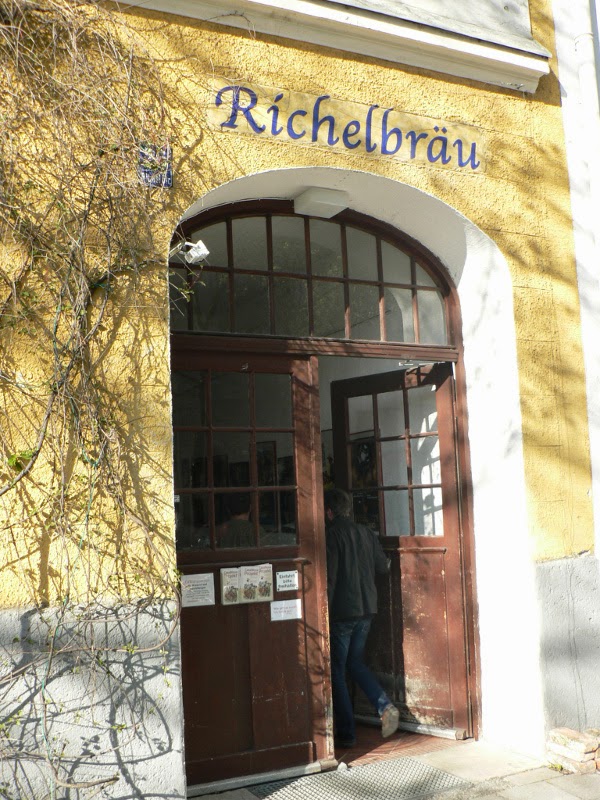 After finishing at Andechser am Dom, he gave us direction to, in his own words, the smallest brewery in Munich. We were curious, expecting some sort of tiny brewpub nobody had heard about. We were still thinking that when we found Diego waiting for us in front of a building with Richelbräu written above the door.
We followed Diego into the building, through a long corridor that led to someone's garden. There was a group of people sitting around a table. We were at a homebrewer's! I've found a couple of internet references about Richelbräu, but, for what I recall, this bloke had nothing to do with it. His beers were called Handkatzn-Bräu. He eagerly shared with us some of his products, and they were quite good! They had roughness around the edges of home made beers, but they were still better than not few commercial ones I've had. 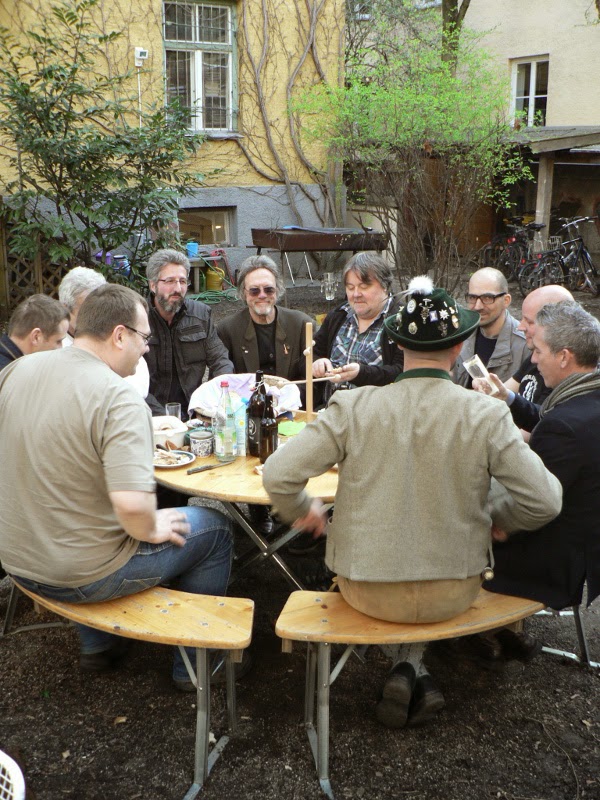 Another magic beer moment, really. We talked to this guy, and with the rest of the group. Enjoyed the beers, the food, the hospitality, and the company. We would have loved to stay for the whole evening, but we had (very pleasant) business to attend – that Masopustní Speciál was waiting for us. We said good-bye to all of your new friends, with the usual promises, and headed back to Au.

When we arrived at the brewery's restaurant in Au, one of the barrels had been tapped already. We were greeted by Michael, the Baron Beck von Peccoz, whose family have owned the brewery for six generations, his wife and his wife's parents, who are Czech born, Kristof's wife, and the Brewmaster and his very quiet girlfriend. 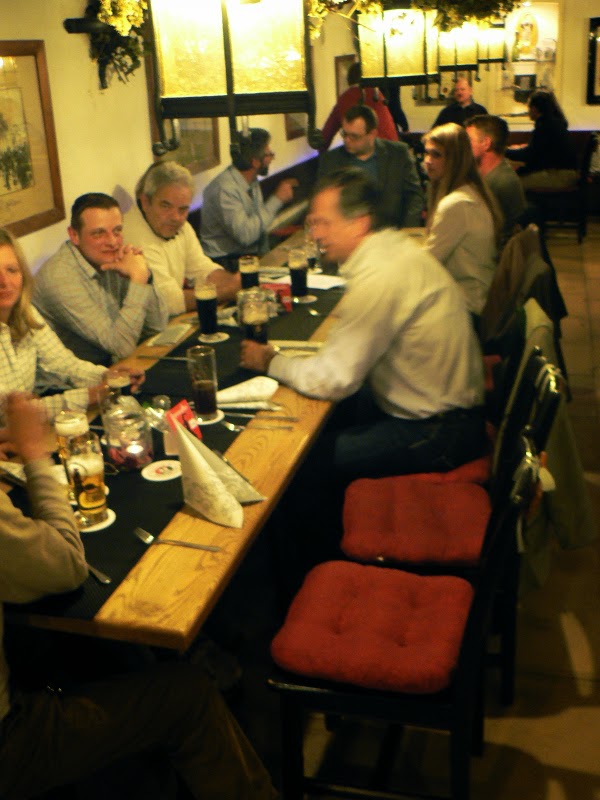 Like the one before, it was a fantastic evening, the perfect coda to a great day. I spent much of the time talking to the Baron's parents-in-law, who, like the Baroness, were excited about being able to speak Czech with someone. Lovely people, all of them.

There was plenty of food, a seemingly endless flow of the glorious Masopustní Speciál. There were also a couple of rounds of Baronator, some Helles Naturtrüb, of course, and more glasses of delicious hazelnut schnapps than I dare count. But overall, a lot of fun.

I want to thank Líbor, Štěpán, Mírek, the people at Schlossbrauerei Au-Hallertau, Diego and everyone else for their generosity and for such an amazing weekend. I had more fun than anyone deserves. Thank all of you very much!