Here we've got something with a rather label from Pivovar Antoš, Slaný. Let's see if the contents are prettier.

I poured it in a glass, a glass made of glass, otherwise, it wouldn't be a glass. The consensus seems to be that a glass is better, so a glass was chosen. I reckon, however, that it would have been pretty neat in an earthenware mug, but I wouldn't have been able to make the mandatory picture. Anyway, the first photo came out crap and I didn't realise until the pint was almost finished, thus the picture you can see. 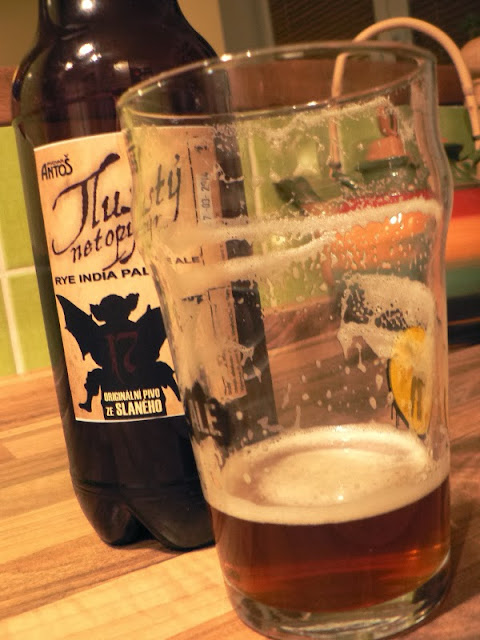 It smells quite nice, really. Not nice enough to wear as perfume, but nice enough to say it smells quite nice; a tad nicer than your average beer of this sort, I'd say. It's got all those pleasantly aromatic things you'd expect from a beer of this sort, not because you've read it in a book, but because you've already had your fair share of beers of this sort; and all is very nicely arranged. If smell was like interior design, it'd be like walking into the living room of someone with very good taste in modern, but not too trendy stuff, and without any artistic pretensions. You know when you look in glossy magazines at photos of interiors that look as if nobody was living there, and how weird it feels? Well, this is not it, this living room is as nice as those in any glossy magazine, but better because it looks like someone is actually living there. So, that's the impression I get from the smell of this beer, that of looking at the photo of a living room in a glossy magazine, but getting the impression that someone, who likes opening the windows in the early morning to let in the fresh air from the Occitan countryside in late spring, leads a very happy life in there. A very nice aroma, indeed.

It doesn't taste half bad, either, far from it, very far from it. Believe me. It's very well balanced, which is nice. Unbalanced things run the risk of falling down and hurting themselves. It's nice to feel, then, that this beer will not fall down and hurt itself. You might end up hurting yourself, though if you ran down the stairs after drinking a couple pints too many of this, which the cheeky bastard will tempt you to do, but that's another story. Either way, the brewer should get some praise for making a beer that can feel safe to walk around, knowing it will not fall down due to some balance problems, and still manage to do it with heads up and with an assertive step.

As for the taste itself. A bit like the smell, actually. You know, all those tids and bits anyone would expect from a beer if this sort, or at least most of them, and something else underlying somewhere in there. It's a note that brings up a memory you wish you had suppressed, it was something embarrassing you did, or rather, something you felt at the time it was embarrassing enough to try to forget, but now you look at it with a bit of a nostalgic smile and almost feel like telling someone about it. It might be bollocks anyway; I can't remember now what I ate or drunk before this beer. But a fancy of my senses or not, it made me smack my lips a couple of times and burp once, which reminds me that this beer's burp also tasted good. Come to think of it, people should write more about the burps in their tasting notes. I didn't myself with this one, but I remember it was a sort of refreshing burp, it could have been able to calm a cough had I had one that day.

This is the sort of beer you should drink if you feel like drinking a beer of this sort. It might even work if you want to drink a beer of another sort, if you don't happen to have that sort of beer at hand, or if you have this beer in the fridge and don't want to wait (provided the other one needs chilling, of course), I guess; I haven't tried myself, so I'm speculating here.