By Pivní Filosof January 29, 2010
Fortunately, Glops Fumada wasn't the only thing that my friend Ramón brought me on his last visit.

When he wrote asking if there was any beer in particular I was interested in, I could have asked him for another sample from Guineu, their Montserrat was lovely and I have good reason to believe it isn't an exception among their product line. I could have also asked him to bring over a bottle from Ales Agullons, so I could see what their beer is like when it's in good shape. However, and against my better judgement, I decided for something from the brewery everyone in Barcelona seemed to be talking about at the time, Zulogaarden. Ramón obliged and during a long, animated and liquid lunch he gave me two samples from this new micro, Norai and Sang de Gossa.

When I saw Norai's presentation I started to have serious doubts about my choice. The label seems hand drawn, cut with scissors by someone who was either laughing really hard or riding a horse and then stuck on an engraved bottle of Alahambra Reserva 1925. To be fair, Ramón mentioned something about that bottle not being for sale when he still insisted on buying it. Anyway, it was the one I decided to open first. 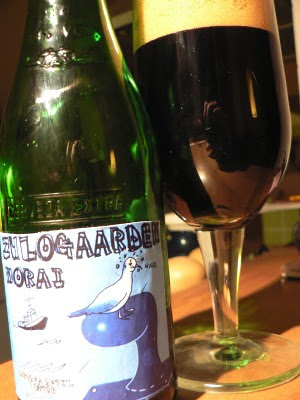 What a surprise! Zulogaarden Norai defines itself as a Porter of Icouldn'tfindhowmuch %ABV (not much, for sure). It pours an expected very dark brown topped by a spongy and firm, lightly tanned head. The nose is lovely, strong sweet coffee and bitter chocolate in stereo surround, very tempting. Light bodied, with a mild sour fruit touch that gives depth to the strong presence of chocolate. A beer with excellent balance and incredible personality. I loved it and I would put it on the same level as Guineu Monthserrat.

With my doubts already gone, a few days later, I opened the bottle of Sang de Gossa, which was in fact the beer everyone was talking about when I wrote with Ramón. Of course, it was also the one I was most curious about. 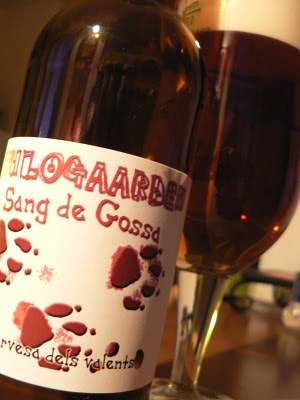 Sang de Gossa calls itself a "Brutal IPA" and "Beer for the Brave". I chose to ignore that bollocks. Having tasted quite a few really brutal beers for the pretty brave (my own cretions included and not precisely because of their high quality) I thought it very unlikely that this beer would live up to its chest beating. Fortunately, what I poured in the glass was good, really good. It pours something right on the border of pale (as in pale lager) and amber, the nose is rich with tropical fruit and sweet oranges. Full and firm bodied with the hops threatening to explode and obliterate everything on their path, though it turns out their are on a leash firmly held by a base of malts and summer fruit. When adding to the mix the fortunately little sediment in the bottle, the beer gets an almost Belgian character that I really fancied. I really, really liked this beer a lot. It's pretty far from being "Brutal", but pretty close from being perfect.

The brewery has recently announced a new batch of Sang de Gossa with a tuned up recipe. I hope the changes aren't too radical and that the brewer has not fallen into the temptation of making a hop bomb, it would be a shame. Anyway, congratulations Zulogaarden for these two fantastic beers. Wish you nothing but success with them.