Ignoring the giant, well, almost (I)

By Pivní Filosof July 25, 2008
I had the rest of the day free. Some of my clients are on holidays. I considered my options, going home after having lunch somewhere to read stuff on the Internet, maybe watch a DVD I could rent on the way or going to Pilsen and visit the three brewpubs working there.

Guess what I chose.

Actually, I almost didn't go, the day was miserable and it didn't seem it was going to get better. But the maps I had printed from the Internet, the camera, the notes I had taken about public transportation and the book I had to read during the trip were heavy in my bag, so I zipped up my jacket and went to Smíchovské Nádr. to take the 10:24 train.

I could have taken the Student Agency bus from Zlíčin, but I wasn't sure about the schedule, nor the price (cheaper than the train) and I didn't want to go all the way there only to be told that the bus was full and I would have to wait for the next one. Also, I knew the train would leave me closer to the centre and one of the trolleybuses I had to take to go to one of my destinations stopped at the station.

90 minutes later the train was arriving in Pilsen. After leaving the main train station I got my bearings and headed to the trolleybus stop. On the way there that perverse side we all have woke up and asked "Why don't we stop by at Pilsner Urquell?" (it would have been easy to get there walking). I slapped him on the back of the head and told him to shut up. I had already been at the brewery and I didn't think I would find anything new. Besides, my goal was another, exploring.

It might have been that short argument with my perverse self what distracted me and made me take trolleybus 13 in the wrong direction. Fortunately, I realised a couple of stops later, got off and went to take the right one, direction Černice. I had bought the 40Kc ticket, valid for the whole day, so I didn't have to bother with getting another ticket. Very practical, very cheap.

After almost half an hour I got off at the stop Gen. Lišky. Walked a few metres towards a tree lined street branching off diagonally. A couple of hundred metres later, at the end of the road, I had arrived to my first stopover, located in a small, very quiet square.

Hotel a Pivovar Purkmistr. I crossed the big patio at the entrance, walking past empty tables because of the rain and went into the restaurant. 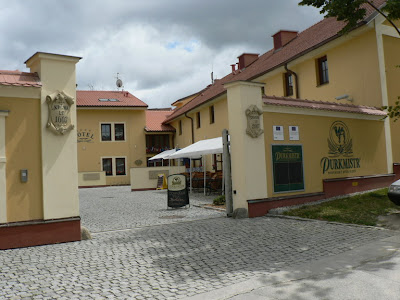 What a nice place. Tastefully decorated, but without fancy o kitch, domintated by the almost required kettles. Something was being cooked in them, and the room had that characteristic and delicious smell of beer in its infancy. The waiter came immediately. I asked what were they tapping and ordered a Ležák, the flagship of most breweries, regardless of the size. 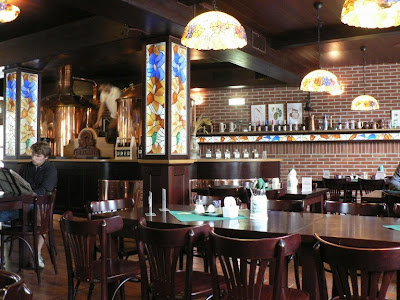 What came to my table was a půl litr full of a beer of very intense golden colour, almost orange, with a thick head. If I hadn't ordered it myself I would have never identified this beer as a Bohemian Golden Lager (though, given that I was in Pilsen, I could call it a Pilsner Lager without lieing). Unlike what I'm used to (fruit, malt, flowers, citrus), the nose of this beer is dominated by yeasts, almost like a Belgian Blonde abbey, with not so intense yet very present pomegranate notes. The flavour is a struggle between fruits and citrus with vanilla notes failing to keep them off of each other. The finish is long, very bitter and very refreshing. I would have loved to sip this beer in the patio, in the sun. 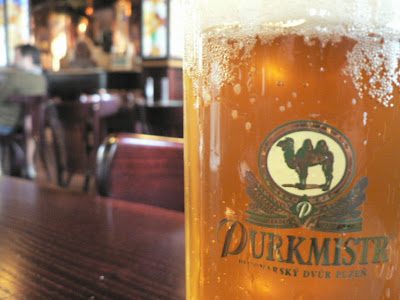 The food arrived, a pork steak with mushroom sauce and coarsely mashed potatoes. Nothing out of this world, but for 69CZK, it did a fairly good job. The waiter noticed that I was writing in my little notepad and asked if I was evaluating the beers and how I liked them. Pretty well, I said and ordered a Písař, the wheat beer of the house.

Typical colour and looks it had. With a lot of ripe banana on the nose and almost nothing else. The banana still dominates the taste, some acidity shows up by the end, but shortly, almost like an obligation, and the banana comes back. I liked it at the beginning, but half way down the glass I was already getting bored, and I was tired of it by end. 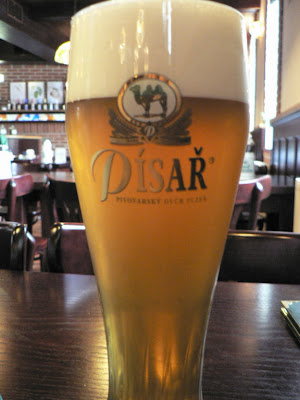 Remembering that I still had quite a lot of drinking to do that day I ordered a small glass of Tmavý Ležák. Fermented at 12° balling, like the previous two. It is a really black beer, with some garnet gleams when against the light. It has a recomforting baked apples bouquet with some chocolate notes. It is on the sweet side. I tasted cocoa, sweet coffe and fruit, and it has a short finish. No big deal, but pretty drinkable, and I'm sure it would be a ladies' favourite. 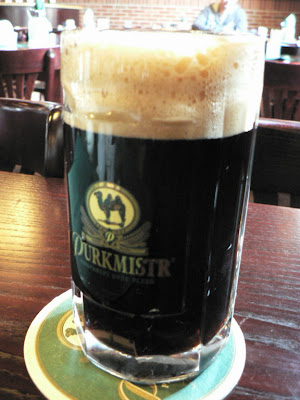 There were still two, the flavoured beers of the day. The servings got smaller. I opted for the sampling glasses of 0.1l. Cannabis and Borůvka (blueberry) was the offer. The former, of light golden colour and with an interesting nose of peach, canabis and citrus. Sweet citrus are the most assertive taste and the weed just up only at the end and without much of a fuss. The latter was darker, the nose was full of fruits with the aforementioned berry taking the lead. When I drank it I felt coffee, caramel and, of course, blueberries. It had a surprisingly dry and very well balanced finish. Refreshing. 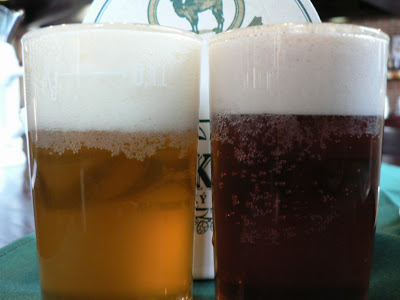 I asked for the bill. Resisting the temptation of ordering another ležák. I woulnd't have minded staying a bit longer. It is a nice place, it was quiet and the service had been perfect. Not to mention the price of 28CZK for a pint, just a couple of coins, really. But I had a mission.

Went back up the tree lined street to the trolleybus stop. U Rytíře Lochoty was awaiting me in the other end of town...