By Pivní Filosof January 08, 2009
The great majority (not to say almost all) of hospody in Prague and the rest of the country only stock two or three beers maximum from the same brewer or brewing group. Restaurace U Kláštera is something out of the ordinary.

The first time I went there was more by accident that decision. I had taken the tram to Břevnoský Klášter with the intention of having lunch at Klášterní Šenk, but that day it happened to be reserved for some sort of social event, so it was closed to the public. Being already quite hungry and without much else to choose from around, I headed towards the other restaurant I had seen opposite the tram stop, U Kláštera. When I got closer I noticed a sign of Klášter above the door, made me glad, I was going to be drinking the same beer after all. There was also a sign of Pilsner Urquell, but that is something I had already seen at other places that stock beers of lesser known brands.

Big was my surprise when besides Klášter (Ležák and Tmavé) and Urquell this pub also tapped Budvar, Kelt, Hoegaarden and Primátor 16%. I was happy to see that last one, I had never seen it on tap in Prague before. But all this was over two years ago.

Back to the present. U Kláštera has never been a place I go very often, it is far from everything for me to go for lunch, though I've been there occassionally to have a quick Primátor 16% before a lesson I have nearby (before you judge me, believe me, with this bloke I teach, I sometimes need that kind of help).

One day, not long ago, I decided to go for lunch. I had a terrible craving for pečené koleno but I didn't want to eat something of Jurassic proportions. I remembered that this hospoda offered it at the nice price of 130CZK, so I thought I would not be too big. And though the food I'd had so far had been very far from memorable, this was a tempting offer. 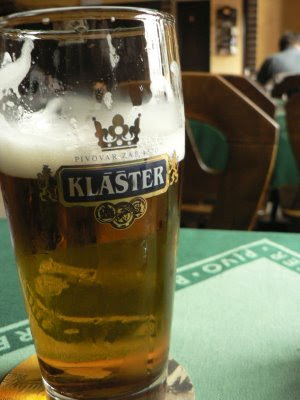 When I arrived the room was almost empty. I was glad. In more than one occassion I went there only to find the place invaded by a lot of very old people, many of whom smoking as if they wanted to prove that cigarrettes aren't that bad for your health.

I took a table by the wall, the benches are far more comfortable than the chairs. The place has a rather rustic aspect of the kind I sometimes like. It actually looks more like a pub at a small village than one in a residential Prague neighbourhood. The waitress, a lady well in her fifties, very efficient and sometimes even friendly, came quickly. I oredered a pint of Klášter Ležák (26CZK, good price) and the food that had brought me there in the first place. 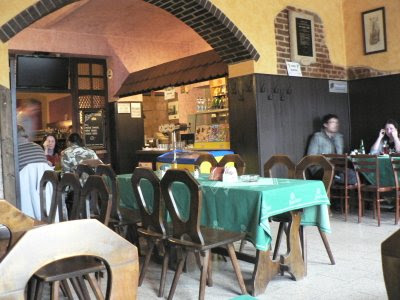 While I waited I noticed that on one of the walls there was a sign of Svijany, and that the Primátor one had vanished. Bad news, the 16% from Náchod was no longer stocked, it had been replaced by Svijanký Kníže a 13°Balling that I like a lot, but that can be found at several other places in Prague. Pity, I was going to go have to go home without dessert.

The pork knee arrived. Bigger than I expected it was. Didn't matter. I left the bone clean. I would have liked it a lot more if the skin had been more roasted, but the meat was pretty tender, tough a touch on the dry side, and for 130CZK it was very good value for money. 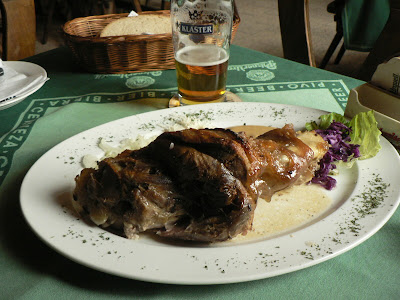 I don't know if I would recommend someone to go all the way there just to visit U Kláštera now that they don't tap Primátor anymore, more so when pretty much at the other side of the street there is a place with much better food that also taps Klášter for about the same price. Now, if you are around, I think this is perhaps a more pleasant place to go for a quick pint than Klášterní Šenk. 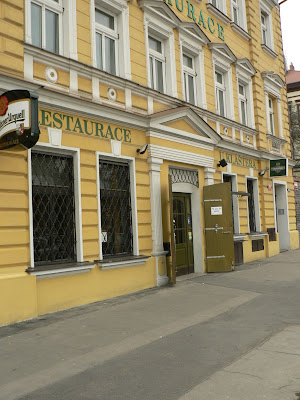