By Pivní Filosof March 08, 2008
The other day with my better half, we celebrated our fifth anniversary together. Every year we go for dinner to a different place, somewhere fancier than usual. this time we chose Klášterní Šenk. 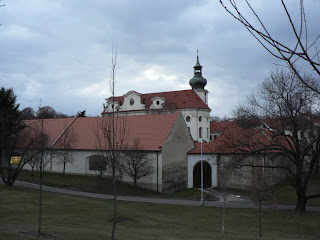 This restaurant is located in the area of the Břevnov monastery, in the neighbourhood of the same name, not too far from Prague's Castle. Nowadays the place is open to the public and you can walk around its beautiful gardens and admire the imposing baroque church of St. Adalbert and St. Margaret.

Atheist as I am, my spiritual calling was good food and good beer. Fortunately, both can be found at Klášterní Šenk.

I knew this restaurant already. I had been there several times and had always liked their food. Not only because it tastes really good, but also because it's great value for money. It also has a very nice atmosphere, and if that wasn't all, everything can be washed down with excellent Klášter beers, but gold and dark.

The restaurant is in a building that before must have been stables or granary. The main room is big and spacious. The stuff used for decorations seems to have been found in the building while it was being done up to accommodate a restaurant. Using old agricultural tools and kitchen utensils is nothing very original for Czech restaurants, specially those at villages. Many times the sheer quantity of them make the decoration something way too kitsch. Fortunately, the people from šenk had some Benedictine austerity when hanging things from the walls and ceiling. The room is dominated by a big open fireplace and the furniture are hardwood with a nice rustic look. It all gives a country atmosphere, almost like a shelter from our noisy modernity. Even the menus match. They are bound in old tin trays, written is sort of Gothic typeface and with funny and informal language used to list the offer. 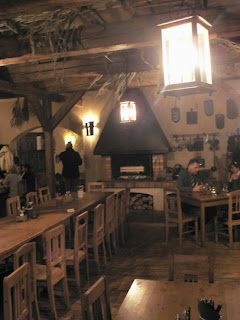 We had a table in the small nonsmoking room, very well separated from the rest. I had wanted one by the fireplace, but they were all reserved. It turned out lucky, when they lit it up, it was really very hot to be around. 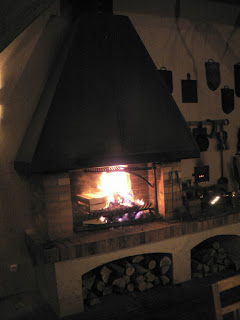 We were given the menus as they showed us to our table. The drinks came promptly, Klášter světlé for me and tmavé for my darling. They were followed by the loaf of rye bread of the day that is always complimentary. It come with a garlic spread and pork drippings, great to open your appetite. For starters we shared břevnovksá šunka, slices of lovely smoked ham (no supermarket rubbish here) that comes together with pickles, honey mustard and horseradish. Quite light and very tasty. 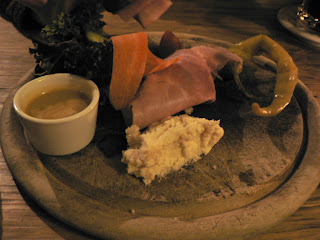 For main course my wife ordered potatoe gnocci with spinach and cream sauce (Klášterní bašta z nočků se špenátem a smetanou míšená). They could have use some more salt, but they were nicely al dente, and the spinach used was fresh and very tasty. For 129CZK, that was almost luxury. 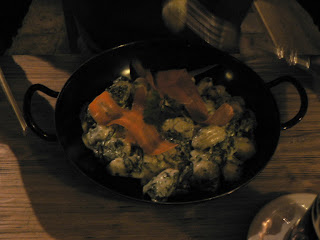 I went for roasted breast of duck with two kinds of kisané zelí and two kinds of knedlíky, potatoe and špekové (with bacon) Prsa z kačice, co na rybníku pod klášterem plula, s obé zelím i knedlíků). Not cheap at 259CZK, but quite a big portion that left my satisfied. The white cabbage was way overcooked for my taste, it was almost a puree, but I know there are people who like it just like that; the red one better. Both tasted very well, with their distinctive flavours and a right balance of sweet and sour that I liked a lot. To my surprised the duck was deboned. The meat was a bit dry, but when dipping in the gravy that was almost hidden under all that food, it almost became a delicacy. The potatoe knedlíky didn't impress me. They needed salt and they didn't have too much of a taste. Now, those špekové blew my mind. They had a great texture and an amazing smoked flavour. I left them for the end and I could have eaten another dozen despite being quite full. 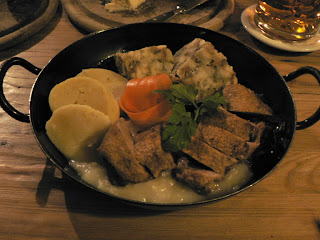 Very good food and very good beer. It is a pity that the products of Pivovar de Hradiště nad Jizerou aren't better known in Prague. They are all very good quality beers. It makes me happy to see a restaurant like this resisting the temptation of stocking the usual stuff. Good for them! 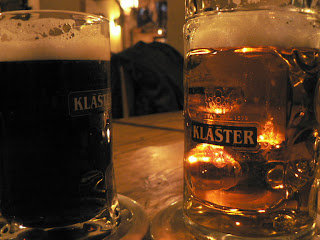 Klášterní Šenk is a very nice place, be it for a romantic dinner or a business one. Despite being far from the centre, it is easy to reach. Trams 15, 22 and 25 will leave your right opposite the monastery. We will sure go back because we both wanted to try more from their menu. 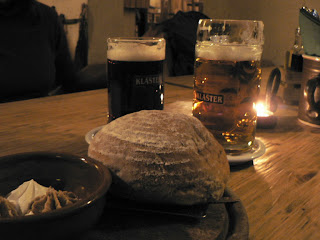